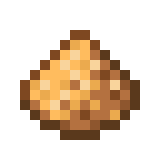 When broken using anything other than a Silk Touch-enchanted tool, a glowstone block drops 2-4 glowstone dust. A Fortune enchantment increases the chances of higher drops to 4 pieces of glowstone dust per block.

Witches have a chance of dropping 0–6 glowstone dust upon death. This is increased by 3 per level of Looting, for a maximum of 0-15 glowstone dust.

In Bedrock Edition, journeyman-level cleric villagers sell one glowstone dust for 4 emeralds as part of their trades.

Issues relating to "Glowstone Dust" are maintained on the bug tracker. Report issues there.