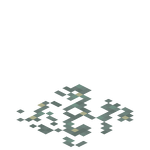 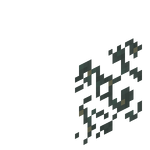 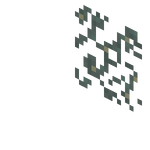 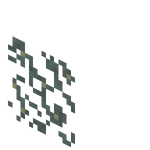 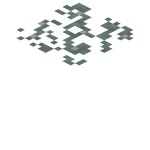 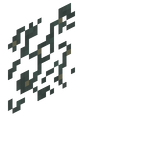 A glow lichen is a non-solid, light-emitting fungi growth that resembles sparse moss that is 1⁄16 of a block thick. It can generate, or be placed, on any side of a solid block.

Glow lichen generates naturally on the sides or bottom of stone, andesite, diorite, granite, calcite, tuff, deepslate, and dripstone blocks that are exposed to air or water sources at or below Y=56.[needs testing in Java Edition][more information needed] In Bedrock Edition, if the Caves & Cliffs experimental gameplay toggle is enabled, glow lichen can generate up to Y=119. It generates more frequently in ravines. It can be found underwater as well as in oceans.

Using bone meal causes glow lichen to spread to a random adjacent block if possible, otherwise the bone meal will not be consumed. By fertilizing one lichen with bone meal, it is possible to cover the sides and the top of an adjacent block, but not the back. Otherwise, glow lichen does not spread naturally.

Glow lichen can be destroyed with anything, but using shears is the only way to collect it. Enchanting shears with Efficiency provides no additional benefit. Breaking them with an axe is the fastest, but does not allow for collection.

Placing a glow lichen into a composter has a 50% chance of raising the compost level by 1.

This section is missing information about Verify if the models are correct - particularly check the mirroring.
Please expand the section to include this information. Further details may exist on the talk page.

Issues relating to "Glow Lichen" are maintained on the bug tracker. Report issues there.