From Minecraft Wiki
Jump to: navigation, search
This article is about the empty bottle. For other uses, see Bottle.
Glass Bottle 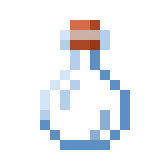 A glass bottle is an item that can hold water, potions, dragon's breath, or honey.

Glass bottles can be obtained by crafting, drinking potions, fishing, or from witch drops.

Witches have a chance of dropping 0–6 glass bottles upon death. This is increased by 3 per level of Looting, for a maximum of 0–15 glass bottles.

Using a water bottle, (or, in Bedrock Edition, a potion, splash potion, or lingering potion) on a cauldron that is not yet full adds that liquid to the cauldron, leaving the player with an empty glass bottle.

Glass bottles can be filled to make water bottles, which can then be used to brew items with a brewing stand. Glass bottles are also used to hold the resulting potion.

A bottle may be filled with water by holding it in the hand and using it on a water source block or a cauldron that has water in it. It can also be filled using a waterlogged block.‌[Java Edition only][1]

Also, a bottle may be filled by powering a dispenser containing a bottle and pointed at a water source block. This does not work with cauldrons.[2]

In Bedrock Edition, a bottle may be filled with potion by using it on a cauldron containing potion. When the bottle is filled, 1⁄3 of the cauldron's potion is removed.

Using a glass bottle in clouds emitted when the ender dragon breathes or shoots a dragon fireball fills the bottle with dragon's breath.

If a bee nest or beehive is full, the player can use a glass bottle on the block, or may power a dispenser that contains a bottle and is pointed at the block, which empties the block and creates a honey bottle.

Expert-level cleric villagers have a 50% chance to buy 9 glass bottles for one emerald as part of their trade.‌[Bedrock Edition only]

Expert-level cleric villagers have a 2⁄3 chance to buy 9 glass bottles for one emerald.‌[Java Edition only]

This page would benefit from the addition of more sounds.
Please remove this notice once you've added suitable sounds to the article.
The specific instructions are: filling from beehives sound event, and anything else potentially missing

Issues relating to "Glass Bottle" are maintained on the bug tracker. Report issues there.