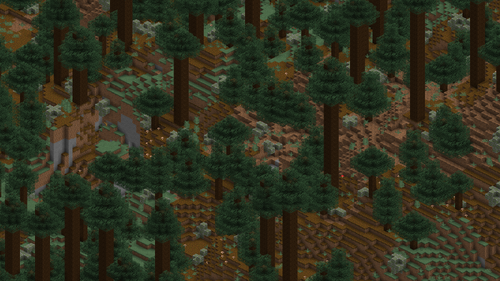 The giant tree taiga is an uncommon cold biome. There are a total of four individual variants in the biome family. 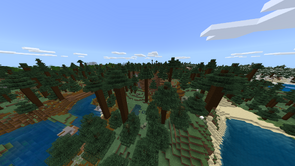 Much as the normal taiga can be considered a colder counterpart of the forest biome, the giant tree taiga can be considered a colder counterpart of the jungle biome. Similarly to jungle and badlands biomes, giant tree taiga biomes generate large in size, are rare, and are surrounded by a thin border of normal taiga to separate them from other biomes, excluding snowy taigas. The normal taiga biome that borders a giant tree taiga biome can generate variants of the former, and the former can also generate next to oceans, unlike the badlands' and jungle's respective border biomes, Giant Tree Taigas usually border jungles and taigas, and they can sometimes border snowy biomes. 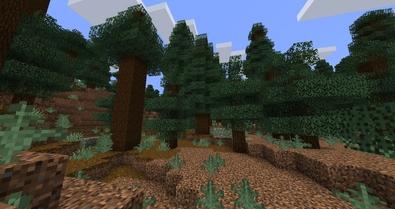 Spruce trees grow all over the landscape, like regular taigas, but most of them are the large 2x2 variants that grow significantly taller than regular spruce trees. Much of the grass is replaced by large swaths of podzol and coarse dirt. Additionally, rocks made of mossy cobblestone frequently generate on the ground, and dead bushes generate alongside the sweet berry bushes, ferns and tall grass on the ground. Wolves, foxes and rabbits‌[JE only] may spawn here, as they can in all taiga variants.

As the climate here is cold, rainfall changes to snowfall above Y=150, though in the giant spruce Taiga variant, snowfall forms at Y=120. Since the snowfall line is so high up, snow rarely forms naturally, even in hilly variants. There are overall more trees in giant tree taigas compared to normal taigas, leading to increased foliage density. This makes wood more abundant, though as a large portion of it grows as part of tall 2×2 spruce trees, it may be more difficult to obtain. Giant tree taigas are slightly more difficult for survival than regular taigas for this reason, though aren't so bad once acclimated and strategies are used to clear the tall trees; they may offer more unique views compared to regular taigas as well.

There are a total of four different giant tree taiga biome variants.

The rare Giant Spruce Taiga variant resembles the regular giant taiga at first glance, although it has more leaves in the treetops. The giant trees in the regular giant taiga usually have small amounts of leaves covering their tops, while the giant trees in giant spruce taigas usually have leaves surrounding much more of the tree trunk. The larger amounts of leaves increases the chances of saplings dropping when these trees are cut down, leading to easier sustainability. The terrain is otherwise the same as the normal giant taiga, with podzol, coarse dirt, rocks. Wolves, foxes and rabbits‌[JE only] spawn here.

In Java Edition, giant spruce taigas use the same mob spawning chances as giant tree taigas for passive and ambient categories. As for the others:

Giant Spruce Taiga Hills is a variant intended to be a more mountainous version of the giant spruce taiga. However, in Java Edition, due to a likely error in the way terrain height is calculated, there is no difference in the terrain between Giant Spruce Taiga and Giant Spruce Taiga Hills. Specifically, the game uses internal values known as setBaseHeight and setHeightVariation when generating hills biomes, but these values are the same for both giant spruce taiga and giant spruce hills, resulting in no actual difference between the two. This is the only hills biome in the game with this issue.[1] There are no wolves in this biome.