This feature is exclusive to Java Edition.
Giant 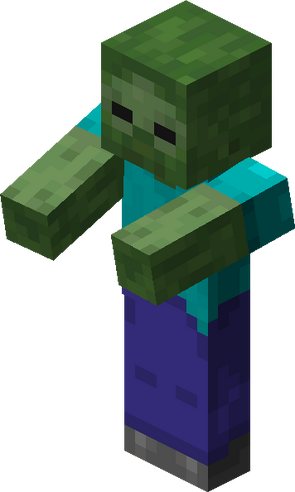 Giants are unused, over-sized mobs that look like zombies. They previously spawned naturally in Indev.

A giant drops 5 when killed and has a chance of dropping some of its equipment if it has any.

No biome includes giants on their spawn lists, so they can never spawn naturally. The earliest available Infdev build (June 18, 2010) does not include giants in the global spawn list, unless using mods.

Additionally, giants simultaneously require a light level greater than 11 and less than 8. This effectively makes it impossible to make them appear through mob spawners.

Giants can be spawned using commands such as /summon minecraft:giant.

Giants are close to 12 blocks tall, and it uses a six-times-enlarged zombie model.

Because giants are not actually undead, they do not burn in sunlight and they are damaged by potions of harming. Iron golems attack giants as they attack other hostile mobs.

Giants also do not convert into drowned when submerged in water. Instead, they slowly suffocate and die.

Giants currently have no AI. The consequence of this is that they always face south when summoned, and they always stay that way, never wandering. They can only turn their head, chase the player, or respond to damage. A giant can never receive knockback. A giant's viewing direction can be changed only with commands or by shoving it into a minecart that faces a different direction.

Giants are in Legacy Console Edition, although they require external modifications for their spawn egg to be placed in the player's inventory, or world corruption.

Giants can move if ridden by another mob using NBT Tags.

Giants have entity data associated with them that contain various properties.

Giants are an unsupported mob and as such issues relating to them may not be fixed.