Edit
For the miniboss in Minecraft Dungeons, see MCD:Ghast.
Ghast 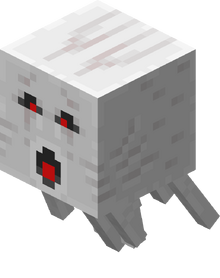 A ghast is a large white floating ghost-like hostile mob in the Nether that shoots explosive fireballs at the player.

To spawn naturally, a ghast requires a solid block below it and a free space 5×5 blocks wide and 4 blocks high. They spawn only in the basalt deltas, nether wastes, and soul sand valley biomes, all three of which exist only in the Nether dimension, and in any light level. In Java Edition ghasts cannot spawn in soul sand valleys if another ghast is within 16 blocks of spherical distance to the intended spawning location; In Bedrock Edition, two ghasts can spawn within any 4 chunk span.

Ghasts do not spawn in nether fortresses, but they can wander nearby.

Ghasts float around the Nether with their eyes and mouth closed and periodically make crying sounds, which can be heard from up to 80 blocks away. They have a hitbox of 4×4×4 blocks, as well as nine tentacles that are not included in the hitbox.

When within range, a ghast faces the player and shoots a fireball every 3 seconds, opening its eyes and mouth and making a screeching sound. A ghast requires a line of sight to the player before firing, which can be blocked by any solid block including transparent blocks. In Java Edition, they target players within 64 blocks horizontally and 4 blocks vertically[1], and continue attacking as long as they are within a 64 block sphere and have line of sight. In Bedrock Edition, a ghast normally targets a player within a sphere of 28 blocks, increasing to 64 blocks if the player damages it.

Ghasts can cause other mobs to attack them, but they never target other mobs, only the player.

Unlike most other hostile mobs, ghasts do not attempt to approach the player once aggravated, but instead fire at the player from their position within firing range.

When at close range, ghasts may take damage and die from their own fireball explosions.

Ghasts can be set on fire, but fire or lava does not harm them. When a ghast sinks into lava, or crosses a lava fall, its speed drops and it is immobilized for a while, making it more vulnerable to arrow shots.

Unlike how they treat all other non-undead mobs, withers never target ghasts deliberately.

Ghasts will shoot fireballs at players, dealing damage to nearby blocks and entities.

Ghasts have entity data associated with them that contains various properties.

Issues relating to "Ghast" are maintained on the bug tracker. Report issues there.