The Overworld is home to many different generated structures. The following is a list of most of them, in alphabetical order.

Abandoned mineshafts are large, complex underground tunnels that contain wood, rails, and minecarts with chests filled with loot. In some cases, cave spider mob spawners can be found encased within a cluster of cobwebs. Some other mob spawners that are possible for a player to find are the zombie and skeleton. A mineshaft is a good place to find ores, considering that is probably what the mineshaft was originally used for. They frequently connect to a dungeon.

Dungeons are small 5x5 (sometimes 7x7) rooms, that randomly generate underground, usually near an abandoned mineshaft or cave. Dungeons contain a mob spawner, which will spawn either zombies or skeletons, as well as two loot chests filled with random items, including some that are not craftable (such as a saddle or name tag).

Igloos are randomly generated in ice plains biomes and cold taiga biomes. They are very small and simple and contain a bed, crafting table, furnace, and a redstone torch. Occasionally, breaking one of the carpets will reveal a ladder down to a basement. There is villager next to a zombie villager, both in separate cells. A chest nearby contains a golden apple and other assorted loot, and a brewing stand nearby contains a splash potion of weakness. You can use these items to turn the zombie villager into a villager.

The terrain varies throughout the overworld, depending on the biome and world generator. Players can find hills, mountains, caves, ravines, and many other natural structures. Tree species and other natural structures like huge mushrooms also vary (or may not generate at all), depending on the biome. There is always a chance that a world seed will generate an Overworld containing extreme or unusual terrain.

Ocean monuments are underwater, pyramid-like structures, which randomly generate in ocean biomes. They consist of several types of rooms and hallways and are populated with guardians and Elder guardians. This is the only place in Minecraft where one can obtain a sponge.

The shipwreck is a structure that was added in 1.13 and can be found mostly everywhere in the ocean and, sometimes, even on land. They are sunken ships with chests containing loot such as suspicious stews and gold ingots. Shipwrecks are mainly made out of wooden logs and wooden planks.

Strongholds are large structures which rarely generate underground. They contain an End portal, a player's only means of reaching the End. A player can also find chests and iron bars here. They contain a seemingly complex system of 3-block high by 3-block wide tunnels leading to sometimes abandoned libraries; most of the time to an intersection where many other tunnels meet.

Players can find two different types of temples in two different biomes throughout the Overworld. They are similar since both contain loot and traps.

Desert temples are found in desert biomes. They are pyramid-shaped and made of sandstone and colored clay. If a player manages to safely reach the bottom of the hidden loot room, without stepping on the pressure plate, they can retrieve treasure out of four chests (with one usually containing a Notch Apple). If a player steps on the pressure plate, it sets off TNT, which destroys all of the treasure.

Jungle temples are found in jungle biomes and are normally hidden within dense tree growth. The temple itself is made of mossy cobblestone and is covered in vines. Two chests of loot can be found inside. In order to reach them, the player must safely make their way through a tripwire and dispenser-filled corridor.

Formerly known as ocean ruins, they were added in the 1.13 Update and can be found almost anywhere in the ocean biomes. They can be found with stone, chisled stone bricks, sea lanterns, sandstone, etc. These structures can spawn on sometimes land or in the ocean most likely. They spawn with chests containing some loot, the chest is hidden and you will need to dig to find it.

Villages consist of several different buildings, populated with various types of villagers, cats, and sometimes an Iron Golem. A village's appearance and layout vary based on the biome in which it generates. For example, a village that is generated within the desert will have houses built of sandstone, smooth sandstone, etc. instead of wood. Certain buildings within a village may or may not spawn, such as the tall "temple" or weaponsmith building.

Woodland mansions generate in the roofed forest biome. These structures contain hostile vindicator and evoker mobs, as well as multiple loot chests. They resemble a figure that contains 52 rooms, and several floors. This is the only structure that a player can get a totem of undying in.

An End city is a tall, tower-like structure which can vary slightly in both size and shape. There are two ways to get to the area where End cities spawn. One way to reach an End city is by defeating the Ender Dragon in the End and then using an Ender pearl to activate the portal. This will take players to the "outer End", where End cities can be located fairly easily. The other, more difficult way to reach an End city, is to build a bridge blocks long at the edge of the main island. This method takes a long time and requires many blocks. Also if unlucky, a player could be knocked off the edge of their bridge by an Enderman. End cities are hard to miss, with their bright-colored purpur blocks, and interesting spire designs. If a player is able to climb past the difficult shulker mobs and reach the top, they may find valuable treasure.

There is a chance an End ship will generate above an End city. These structures contain a single elytra and other rare treasure loot. Shulkers may spawn in or on the ship.

When you enter the End, you will spawn on top of an obsidian platform before either building your way across, digging your way out, or get lucky enough and spawn very near the main End island.

Structures that are coming to the game soon. 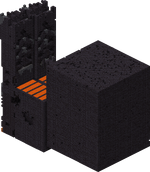 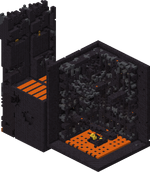 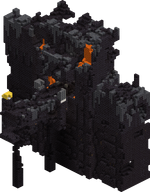 Bastion Remnants are structures that are the bases of Piglins and Hoglins that live here similar to the pillager outpost. The Bastion Remnants were announced at MINECON Live, and are going to be in the 1.16 - Nether Update and came out in snapshot: 20w16a.

The Huge Funguses are structures that spawns in the Warped & Crimson Forest's they were shown at MINECON Live and are in the 1.16 - Nether Update. The Warped varient of this structure will have Warped stem, Warped wart, nether sprouts nearby , twisting vines and Shroomlight. The Crimson varient of this structure will have crimson stem, Weeping vines, Nether wart blocks, and Shroomlight. Both variants can have nether roots generated nearby.

The Ruined Portal is a naturally generated structure in the 1.16 update with Obsidian, Crying Obsidian, etc. This structure was built long ago by an unknown person but it seems like something destroyed the Nether Portal. These Ruined Nether Portals generate in the Overworld, and in the Nether.

Retrieved from "https://minecraft.fandom.com/wiki/Generated_Structures?oldid=205850"
Community content is available under CC-BY-SA unless otherwise noted.