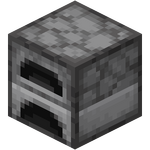 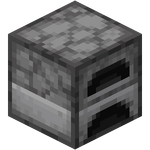 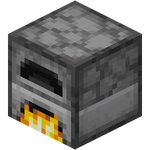 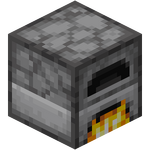 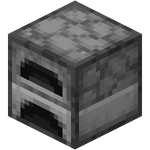 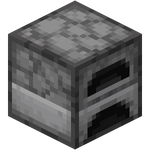 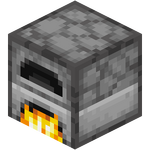 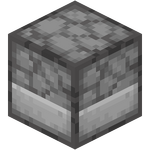 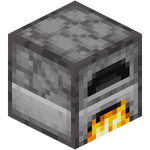 A furnace is a storage block used for smelting of blocks and items, converting them into other blocks or items.

One furnace generates in every igloo.

Furnaces can be found in plains, desert, and some savanna village weaponsmiths. Furnaces also generate in some houses in snowy tundra villages, and in one of the taiga/snowy taiga‌[BE only] village houses.

A furnace can be mined using any pickaxe. A furnace will also drop all of its contents when broken. Mining without a pickaxe takes 17.5 seconds.

In Java Edition, breaking a minecart with furnace drops both the furnace and the Minecart.

The lit furnace can be obtained in Java Edition only with commands such as /give @s minecraft:furnace{BlockStateTag:{lit:"true"}}, although it does not appear lit in the inventory. In Bedrock Edition, the lit furnace block can be obtained only by inventory editing. It always stays lit, despite containing no items.

Furnaces cannot be pushed by pistons in Java Edition.

The main purpose of furnaces is to allow for smelting. Its interface can be opened by pressing the use item button on it.

Furnaces emit a light level of 13 when active, as well as smoke and flame particles.

By default, the GUI of a furnace is labeled "Furnace", but this name can be customized by naming it in an anvil before placing it, or by changing the CustomName tag using the /data command‌[Java Edition only].

Furnace can be placed under note blocks to produce "bass drum" sound.

In Bedrock Edition, furnaces use the following data values:

A furnace has a block entity associated with it that holds additional data about the block.

Issues relating to "Furnace" are maintained on the bug tracker. Report issues there.