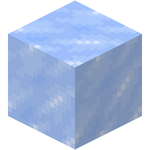 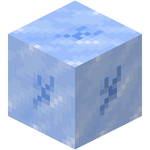 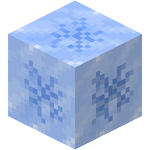 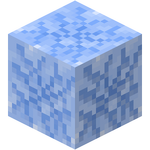 Frosted ice behaves in most ways like ice: it is slightly slippery, causing entities to slide, including items.

Frosted ice naturally melts fairly quickly. The block is created with an age of 0, and is ticked every 1–2 seconds. If a 1⁄3 chance succeeds or the block has fewer than 4 frosted ice blocks in the 6 blocks surrounding it, and the light level (including light from the sun) at the block would be greater than 11 minus the age, the age is incremented. When the age reaches 4, the block turns into water and all adjacent blocks have their age incremented (but if these blocks melt also, the effect does not continue to cascade). This does mean that in places with low light levels, such as inside caves or at night, it never melts naturally.

Frosted ice can be easily destroyed without tools. Breaking it with Silk Touch drops nothing, while breaking in any other manner produces water in the same way ice does.

Sugar cane and other crops do not break when frosted ice is formed, and frosted ice does not form on water occupied by another entity.

The following content is transcluded from Technical blocks/Frosted Ice.

Issues relating to "Frosted Ice" are maintained on the bug tracker. Report issues there.