Edit
watch 28:07
Minecraft Interactive Experience
Do you like this video?
Play Sound
This article is about the mob in the base game. For the pet mob in Minecraft Dungeons, see MCD:Arctic Fox.
Fox 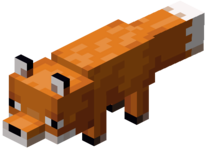 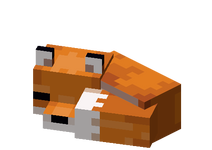 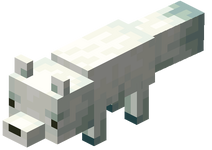 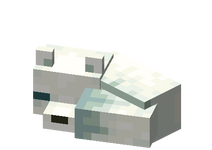 Foxes are nocturnal passive mobs that spawn commonly in taiga, old growth taiga, and snowy taiga biomes. A fox can carry a single item in its mouth, but prefers food over other items.

5% of them spawn as babies.

Foxes that spawned in a snowy biome are white.

Foxes have a 20% chance to spawn (via spawn egg or naturally) with one of the following items in their mouth:

Upon death, adult foxes drop 1–2‌[JE only]/1–3‌[BE only] when killed by a player or tamed wolf.

Like other baby animals, killing a baby fox yields no experience.

Foxes always drop any item they pick up and are still holding (they cannot drop food that they have eaten, for example) and drop items they spawn with naturally with a 100% chance, so:

If a fox is killed while holding a totem of undying, then the fox consumes the totem and revives itself instead of dropping the totem.

Upon successful breeding, 1–7 are dropped.

Foxes move quickly like ocelots and flee from nearby players, wolves and polar bears when wild, unless the player approaches them while sneaking. They take no damage or speed reduction while moving through sweet berry bushes.

Foxes attack either by running up to the target or by pouncing. Like rabbits and goats, foxes can jump (pounce) more than one block high without status effects or player input. A fox prepares to pounce by tilting and lowering its head and lowering its body to become shorter. Then it leaps 2–5 blocks into the air. Foxes can jump over fences and walls. In Bedrock Edition, foxes also shake side to side before pouncing and their legs can be seen waving while in midair.

Foxes attack chickens, rabbits, cod, salmon, and tropical fish. Foxes also attack baby turtles on land only. However, foxes don't attack wolves, even if they are being attacked by them. Foxes also may attack mobs that hurt a player they trust.

A fox that pounces into a snow layer becomes momentarily stuck, remaining face-down, emitting particles while shaking, and returning to normal shortly after.

Foxes attempt to run toward the closest attackable mob, even if attached to a lead, but do not attempt to break the lead.

Foxes that trust the player attack zombies, drowned, husks, zombified piglins, skeletons, wither skeletons, strays, phantoms, silverfish, endermites, spiders, cave spiders, vexes, vindicators, evokers, pillagers, ravagers, blazes, endermen, goats and pandas, when those mobs attack the player. They do not attack any mob the player attacks, unlike tamed wolves. They also do not attack zombie villagers despite the fact that they are a zombie variant.

A fox that trusts the player flees from wolves and polar bears, unless the wolf or polar bear attacks the player, in which case the fox attacks in defense of the player.

When attacking phantoms, foxes do not jump to attack.

A trusting fox does not attack a tamed wolf unless the fox doesn't trust the player who tamed the wolf.

Foxes are one of the few mobs in the game that can sleep, along with cats, villagers, and bats.

During the day, if a thunderstorm is not occurring, foxes attempt to find a space with a sky light level of 14 or less and sleep. Block light has no effect on this. While it sleeps, it slowly moves its head up and down. A fox wakes if approached by a player or mob. Foxes do not flee if the player approaches while sneaking until the player gets on an adjacent block.

If the sky light at the fox's position becomes 15 or above, either due to a block above being destroyed or the fox being moved, the fox wakes up.

Foxes can drop and pick up items in their sleep.

Trusting foxes can fall asleep even if attached to a lead. They can also be moved with leads while sleeping.

Foxes do not sleep if they are within 12 blocks of an armor stand.

Foxes occasionally make loud screeches during nighttime, unless a trusted player is near them.

A fox sits down sometimes during the day if the fox cannot find a shaded area to sleep. The fox sits only for a short time, then hops back up. Foxes sit down even when attached to a lead or in a boat. Foxes that have not been bred by the player always sit while in the Nether, even while attached to a lead.

If any item is on the ground near a fox, it travels to the item and picks it up, and the item appears in the fox's mouth. This behavior is not limited to food and animal products; a fox can pick up any item that the player can pick up. However, they prefer to pick up food items, and if they have already picked up non-food items, they drop the non-food items to pick up food instead. A fox eventually eats any food item it picks up (besides cake) and the fox is affected by any side effects from the food, such as poison or teleportation. For example, if a fox eats an enchanted golden apple, it obtains the absorption and effects of the enchanted apple. If there is a stage 3 or 4 sweet berry bush within a 16 block radius of a fox, it sprints toward the bush and eats the berries, dropping the item it was holding. It is the only mob not damaged by the sweet berry bush, and still moves quickly. If a fox picks up a weapon or an item with enchantments, including Looting and Fire Aspect, these items affect the fox's attack as if the fox is wielding the weapon in its main hand, although the item retains its durability when used by the fox. If a fox is holding a totem of undying, it receives the effects after taking fatal damage. If a fox is holding a chorus fruit, it eats the fruit and teleports accordingly. In Bedrock Edition, if a fox wields a sword with the Fire Aspect enchantment while attacking a mob on a campfire / soul campfire, it ignites the campfire and does critical damage to the entity.

During the night, foxes sometimes go to villages. There, they can be seen attempting to attack villager-owned chickens, which can be heard squawking. Arctic foxes go to snow villages, and red foxes go to any other type of village, preferably taiga villages since foxes spawn in the taiga biome.

When sweet berries or glow berries are used on two foxes, the foxes breed, producing a baby fox. The baby fox trusts the player that bred it and does not flee from that player as it grows up; however, because baby foxes also follow nearby adult foxes, an adult running away from the player may cause the baby to do the same. A lead can be useful during this time to keep the baby fox from fleeing until it has finished maturing to an adult itself, or the player can simply kill the adult foxes with a ranged weapon.

If a red fox is bred with an arctic fox, the baby has a 50% chance of being either red or arctic.

Tamed foxes retreat from polar bears and wolves but not tamed wolves. A tamed wolf whose owner attacks a tamed fox also targets the fox.

This article needs cleanup to comply with the style guide. [discuss]
Please help improve this page. The talk page may contain suggestions.
Reason: Still seems to manually insert categories for some reason

Foxes have entity data associated with them that contain various properties.

This page would benefit from the addition of more images.
Please remove this notice once you've added suitable images to the article.
The specific instructions are: Pixel art fox from the biome vote video

Issues relating to "Fox" are maintained on the bug tracker. Report issues there.