Edit
watch 28:07
Minecraft Interactive Experience
Do you like this video?
Play Sound
This article is about Overworld fossils. For the similar structures generated in the Soul Sand Valley, see Nether Fossil.
Fossil 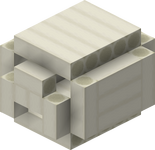 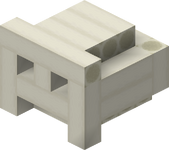 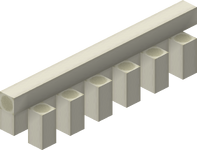 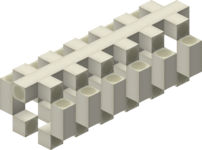 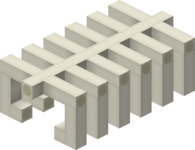 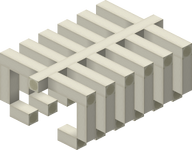 A fossil is a rarely-occurring skeletal structure composed of bone blocks, coal ore, or diamond ore.

Fossils first generate the pure-bone block fossil with a structure integrity of 0.9, meaning 10% of blocks are replaced by structure voids, leaving 90% bone blocks. Next, the coal fossil generates with a structure integrity of 0.1, with 90% of the fossil blocks are replaced by voids, leaving 10% coal. The locations of coal blocks do not always correspond with the voids generated in the bone fossil, so the resulting combination of both generations combine to make an incomplete fossil structure composed of bone blocks, coal, and structure voids.

As of 1.18, there are two types of fossils, each having a 1⁄64 chance to generate per chunk. One fossil generates with coal ore between levels 0 and 320. Another with diamond ore rather than coal ore generates from level -63 to -8.

Naturally-generated fossils are composed of a mix of bone blocks, coal or diamond ores, and structure voids, as detailed above. They are made with the NBT structure block format and have NBT files for each type of fossil located in the folder minecraft.jar/data/minecraft/structures/fossil.

Issues relating to "Fossil" are maintained on the bug tracker. Report issues there.