From Minecraft Wiki
Jump to: navigation, search
This article is about the regular Forest. For other forest biomes, see Forest (disambiguation). 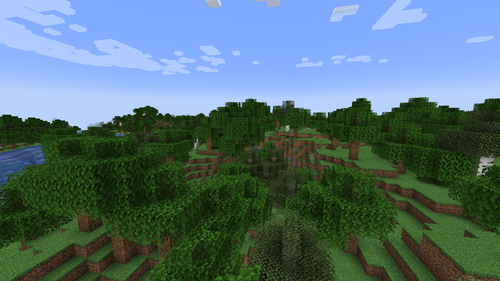 Forests are temperate biomes. There are a total of three variants in the biome family. They are the most common biome in Minecraft, being only slightly more common than plains.

Forest biomes are common, flowery, and densely wooded with oak and birch trees. Lilies of the valley, lilacs, rose bushes, and peonies are found alongside the usual dandelions and poppies. Wolves spawn in forests, making this the only other biome aside from taigas where wolves can spawn. Lakes are frequent, and like the jungle biomes, forests also generate shallow lakes that are much larger than small ponds generated in other biomes.

Forests may also generate in patches within plains; these patches are only a couple hundred blocks in size, making forests some of the smallest biomes. Forests and their variants sometimes generate on islands within deep oceans.

Forests are one of the most preferred biomes to start a survival world, serving abundant amounts of wood, grass and flowers, water, and passive mobs, and they do not have many dangers aside from the usual hostile mobs. Tamed wolves can help fight against hostile mobs, making them especially useful for when players lack resources for armor. The density of the trees, however, can obstruct vision and get a player lost quickly; random surface-level lava pools are possible, albeit rare, and start forest fires when close to trees.

The main forest biome has two additional variants, for a total of three different forest biomes. Not included are dark forests and birch forests, as they are considered separate biomes.

Forest is the standard forest biome variant and the most common biome in Minecraft. Along with plains, it was one of the first biomes in the game. Wolves may spawn here. Shallow lakes sometimes generate here.

Wooded Hills are similar to forests, though the terrain is hillier and generally more erratic, making it less suitable for shelter. Wolves may still spawn in the hills.

Wooded hills use the same mob spawning chances as forests.

The Flower Forest variant has fewer trees than the regular forest, but boasts countless numbers of flowers across its landscape. Like in plains, large oaks replace 33% of small oaks, rather 10% in other forests.

All types of flowers except for sunflowers, blue orchids, and wither roses generate in the flower forest; in fact, besides in woodland mansions, allium flowers may generate only in flower forests. The vast number of flowers makes this biome variant an excellent source of dye.

The terrain here is more erratic and mountainous than the regular forest, similar to the wooded hills. Wolves do not spawn here, but rabbits can. Bees and bee nests spawn in this biome more commonly. Along with more mountainous terrain, terrain in this biome also often goes below sea level, making shallow lakes much more common than in regular forest.

Flower forests use the same mob spawning chances as forests for hostile and ambient categories. As for the passive category, In Java Edition: