Edit
watch 28:07
Minecraft Interactive Experience
Do you like this video?
Play Sound
For the command, see Commands/fog.

Fog is a rendering feature intended for obscuring the player's view distance, usually for atmospheric effect or for seamlessly occluding sharp boundaries such as unloaded chunks. While traditionally referring to render distance, there are many other types of fog that can be encountered in-game under specific circumstances.

This section's name is unofficial.
An official name is yet to be given to the subject matter. Please add an official name when reliable sources confirm it.

This refers to fog which is rendered in normal circumstances, and becomes the most notable with low render distance. Distance fog's color matches that of the sky.

Due to the fog's replication of sky color, its color changes depending on:[needs testing]

This section is missing information about Bedrock Edition values moved from the Tint page.
Please expand the section to include this information. Further details may exist on the talk page.

When the camera is below water, a dedicated fog effect will be applied to simulate this. Underwater fog will progressively recede with time spent underwater.

The color of this fog changes depending on the player's current biome. Notably, swamps have a brown/yellow murkier and thicker fog effect than most other biomes.

When the camera is below lava, an even thicker fog effect will apply. While it is invariant with time, the Fire Resistance effect will mitigate it to a small degree.

Being beneath powder snow will impart yet again another fog effect. There is no known workaround for this.

This section is missing information about everything that affects distance fog (see above), especially the sun thing.
Please expand the section to include this information. Further details may exist on the talk page.

Being in the Nether has its own fog effect. While not visible on low render distances due to distance fog, increasing render distance beyond a certain point will yield no visual differences due to the presence of this fog. Its color also depends on the player's current biome.

This fog can be applied to any custom dimension by setting the dimension effect (the effects parameter) to minecraft:the_nether ‌[Java Edition only]. Do note that this will sacrifice the sky, sun, moon, stars and clouds.

The Blindness status effect imparts a very thick fog on the player's vision.

This section describes content that exists only in outdated versions of Java Edition.
This feature used to be in the game but has since been removed. 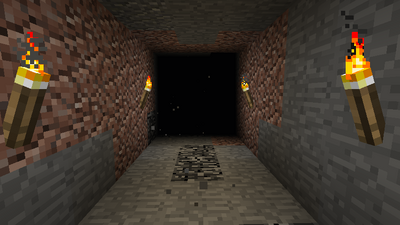 In prior versions of Java Edition (specifically Beta 1.8 Pre-release through 14w34b inclusive, up to its removal in 14w34c), a thick black fog was introduced. As the player descended below Y=17[verify] in the Overworld, this fog would start to appear. As the player traveled deeper, the fog at the edge of the render distance would become closer until the player reached the first layers of bedrock, where visibility was reduced to just a few blocks, beyond which was complete darkness. The gray void particles appeared below Y=17, as well as in the void.

The existence of this fog depended on a lack of sky lighting.[verify] If vent holes were opened up to allow sky light to enter an otherwise secluded underground space, void fog would no longer be present so long as the player kept near this sky light source.

Issues relating to "Fog" are maintained on the bug tracker. Report issues there.