Edit
watch 28:07
Minecraft Interactive Experience
Do you like this video?
Play Sound
For the artifact in Minecraft Dungeons, see MCD:Fishing Rod.
Fishing Rod 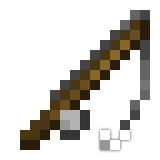 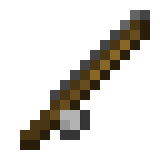 A fishing rod is a tool used primarily for fishing.

Enchanted fishing rods can be obtained as "treasure" items from fishing, and unenchanted ones as "junk" items.

Journeyman-level fisherman villagers sell enchanted fishing rods for 6 emeralds. The enchantments are the same as the ones obtained from an enchantment table at levels 5–19.

Carrot or warped fungus on a stick[]

If a carrot on a stick or a warped fungus on a stick is used to the point of zero durability, it becomes a fishing rod again.

In Java Edition, the drowned mob has a 3.75% chance of spawning with a fishing rod equipped. In Bedrock Edition, naturally-spawned drowned has 0.85% chance to spawn with fishing rod, while converted drowned has 1% chance to spawn with it. If killed, they have an 8.5% chance of dropping this fishing rod. That chance increases by 1% for each level of Looting applied to a weapon (up to 11.5% chance). The dropped item is damaged and never enchanted.

Fishing rods can be cast into water. After a short period of time, a stream of bubble particles approaches the fishing rod. If the rod is reeled in once the particles "bite" the bobber, the player obtains a fish, junk, or possibly a treasure item. If the fishing rod was in the player's hand and is no longer, the fishing bobber entity despawns, unless the fishing rod to the off-hand or it's been swapped with another fishing rod[citation needed].

Hooking mobs and other entities[]

The fishing rod can be used to hook mobs, items‌[Java Edition only] and some entities, and even players. The fishing rod can then be reeled in, dragging the hooked object toward the player without dealing damage. Reeling in a mob or entity costs 5 points of durability, and reeling in an item costs 3 points. Reeling a mob pulls it toward the player with a speed of 1⁄10 the distance between mob and player.

Besides mobs and items, entities that can be reeled in include:

Some entities can be hooked, but cannot be reeled in:

Attempting to reel in said entities still costs durability to the rod.

The rest of the entities cannot be hooked at all:

Using it on a villager lowers the player's popularity and causes any naturally-spawned iron golems nearby to attack.

A fishing rod can be used as fuel in furnaces, smelting 1.5 items per fishing rod.

A fishing rod can receive the following enchantments:

A fishing rod with the Mending enchantment has infinite durability if used for fishing only. The rod incrementally repairs itself using the experience gained each time a player reels in a fish, even if starting from nearly 0% durability. Players wearing damaged Mending armor have a lower average rate of repair, because the mending mechanic can ignore damage to the rod while repairing armor instead. Unbreaking III can nearly guarantee that the rod does not break, unless it's already at low durability. 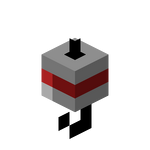 Fishing bobbers have entity data associated with them that contain various properties of the entity. They also appear to despawn after a while.

This page would benefit from the addition of more sounds.
Please remove this notice once you've added suitable sounds to the article.
The specific instructions are: Old throwing sound (pre-Sound Update), which was used for fishing rods

Issues relating to "Fishing Rod" are maintained on the bug tracker. Report issues there.