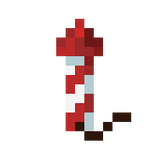 A firework rocket is an item (and entity) used for creating decorative explosions, boosting when flying with elytra, and loading into a crossbow as ammunition.

To launch a firework rocket, use its item on a block. They can also be launched from dispensers and crossbows. If shot from a Multishot crossbow, then 3 rockets fire with the same effects.

A firework rocket can be used as ammunition for crossbows, although it deals damage only if it has an explosion effect. A higher flight duration gives the firework rocket a longer range, and more damage is added per firework star. The Piercing enchantment has no effect on firework rockets shot from a crossbow.

In Java Edition, if a firework rocket shot from a crossbow hits an entity, the rocket instantly explodes, no matter the flight duration. Attempting to do this in Bedrock Edition, however, results in the firework passing through the entity,[1] so the player must plan where to aim.

The explosion of a firework rocket deals damage to mobs and players that are within 5 blocks and not obstructed by solid blocks. The maximum damage of a rocket with one firework star is 7

, with the damage decreasing with distance. Each additional firework star on the rocket adds 2

points of damage, for a maximum damage of 19

× 9.5 with 7 stars. Using commands to add additional firework stars results in more damage. The damage dealt is unaffected by any other ingredients used. The explosion does not destroy end crystals nor damage the Ender dragon, but does destroy armor stands.

If the explosion exceeds the (unmodded) particle limit of 16,384, the oldest particles are removed before displaying new ones, resulting in severely diminished firework quality / duration. At most a firework should have 3 trail stars, more than that could waste diamonds, firework stars, and other fireworks. Particle counts per star are:

Like most other entities, they can be moved by water and explosions, and teleported via portals. They also cannot move through solid surfaced blocks, upon hitting one, they either move to a side or explode based on the duration. If a firework explodes under a block, its explosion is flattened.

Fireworks travel different heights based on the amount of gunpowder added. The number is displayed as a tag on the item's tooltip with the description of "Flight Duration".

The height it rises is between 8 and 20 blocks with 1 gunpowder, 18 to 34 blocks with 2 gunpowder, and 32 to 52 blocks with 3 gunpowder. (Note: Using command blocks, firework rockets with higher durations go higher and keep accelerating with virtually no terminal velocity. If the duration is long enough, the firework rocket could reach heights of over 1,000,000 blocks and speeds of over 10,000 m/s in a matter of minutes. Such fireworks with significant X and Z motions speed up sideways exponentially and reach outside the world boundary in a matter of seconds.‌[Java Edition only])

When spawned, fireworks have a vertical speed of .05 and a random small X and Z speed (random value near zero with a standard deviation of .001). Each firework also determines its lifetime in ticks by 10 × (number of gunpowder + 1) + random value from 0 to 5 + random value from 0 to 6, after which it explodes. Each tick, the firework accelerates horizontally by multiplying its X and Z velocities by 1.15, and vertically by adding a constant factor of .04.

Fireworks can be made to travel different directions by being dispensed or launched under flowing water. The firework's direction combines with the flow of the water to go diagonally.

After successfully defending a village from a Raid the villagers may celebrate by setting off firework rockets.

Fireworks can be used to boost elytra when in flight. Normally, elytra can glide for a short distance, but with the use of fireworks, the player can fly a long distance, gain speed, and take off from the ground.

Simply using the firework rocket with elytra spread boosts the player in the direction the player faces. It can leave behind a trail sometimes.

Although fireworks with firework stars can be used, the player takes blast damage if they use it in flight.

Issues relating to "Firework Rocket" are maintained on the bug tracker. Report issues there.