Edit
watch 28:07
Minecraft Interactive Experience
Do you like this video?
Play Sound
This article is about the status effect. For the enchantment, see Fire Protection. 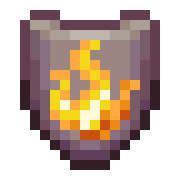 Grants immunity to damage from fire, blaze fireballs, fire charges, magma blocks, and lava, but not ghast fireballs and blaze touch attacks. Negates the fire damage from bows enchanted with Flame and swords enchanted with Fire Aspect, but does not affect the attacks themselves. The fog effect under lava is also mitigated somewhat. In Bedrock Edition, the view with the effect is stronger than in Java Edition.[1] Fire Resistance also prevents the fire itself from covering the player's screen. ‌[BE only]

All boss mobs are immune to this status effect.

Mobs that are immune to fire, such as blazes, are unaffected.