A Fire Charge is an item that was introduced in Minecraft 1.2.1. When right-clicked, the block selected will burn, even if it's not flammable, it is like flint and steel in a way. Fire charges may also be shot from a Dispenser, in which case it acts like a Blaze fireball, flying in a straight line with random aim and placing fire to any block or entity it hits.

Fire charges, compared with Flint and Steel, are renewable, but they require the player to gather its most important ingredient, blaze powder, which can only be obtained by killing Blazes. Gunpowder is also needed to make this item. Coal or Charcoal is also required to craft a fire charge. Fire charges can also activate TNT, whether fired from a dispenser or by hand.

Fire Charges are used in the crafting of Firework Stars.

Burning grass and dirt with a fire charge in hand. 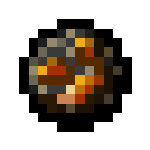 The old icon for fire charges.

Ghast Shooting A Fireball which uses the Fire Charge Texture.
Add a photo to this gallery

Retrieved from "https://minecraft.fandom.com/wiki/Fire_Charge?oldid=225385"
Community content is available under CC-BY-SA unless otherwise noted.