This article is about the Fire block in PC and XBOX. For The technical Pocket Edition block, see .name.
Fire 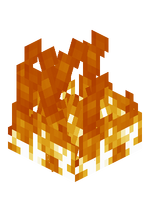 Fire is a non-solid block which produces 15 units of light. It has animated faces on all four sides, and two more faces on the inside in an X shape. Fire blocks are only generated naturally in The Nether and in The End (on top of the bedrock that spawns on top of the pillars). The Player can create fire using a flint and steel or a fire charge. Ghasts and Blazes can also create fire, as can lava and lightning. Fire spreads naturally to other nearby flammable blocks, and it can be placed as a block in modded clients.

As a crafting ingredient

Fire is used to craft chain armor, but it can only be legitimately obtained through trading or by killing zombies or skeletons that are wearing chain armor. It is also possible to obtain fire in a player's inventory by using the /give command, mods, or an inventory editor. Chain armor is crafted the same way as any other armor, and has slightly more durability than gold armor.

Fire is not available for use in Classic mode. Flint and steel is one method used to place fire in the environment. When placed, fire will burn for a short and randomly determined amount of time. If nothing flammable is adjacent to it, the flames will not spread, and will die out. Wooden planks, wooden slabs, wood, leaves, vines, tall grass, wool, fences, wooden stairs, and bookshelves are all flammable. If you place a bed in The End or Nether and try to sleep it will explode and create fire. Fire can melt ice, and TNT will detonate if exposed to fire. Fire will burn leaves slightly faster than the other flammable objects, suggesting the game has coding differences between some different types of flammable blocks. Many blocks do not burn away even though they may appear to catch fire. Two notable block types which do not burn away are wooden chests and crafting tables.

Mobs and players will catch fire when exposed to fire. Fire will obstruct the player's view slightly and they will slowly lose life at a rate of ½ heart per second. This is the same rate that the player gains health in peaceful mode, so fire alone will not kill you in this mode. Additionally, if one is wearing diamond armor and has a full hunger bar, said person will lose health slower in the fire block itself than when on fire.

Fire can be used to damage or kill mobs without causing them to become hostile to the player. Items or blocks falling into fire will catch light and quickly disappear. This trick can be used to dispose of unwanted materials, but it can also destroy valuable drops before they can be retrieved. Lava can set off TNT, but it may take several minutes to do so, and this usually gives time to clear the lava away before the TNT is triggered.

If a cow, pig, or chicken dies while taking fire damage, it will drop the cooked version of its usual meat; cows drop cooked steak(s), pigs drop cooked porkchop(s), and chickens drop a cooked chicken(s). This can be exploited by the player to not need to cook the meat. With a flint and steel, or a fire-enchanted weapon, all meat yielded will be cooked, and then eat the food there and then for its full potential.

Fire will spread over flammable surfaces, slowly causing all the blocks it can reach to burn away. Fire can climb up walls, across floors and ceilings, and over small gaps. More precisely, a fire (or still lava) block can turn any air block that is adjacent to a flammable block into a fire block. This can happen at a distance of up to one block downwards, one block sideways (including diagonals), and four blocks upwards of the original fire source.

Fire will burn out after a while on its own, however the player may want to extinguish the fire as soon as possible to prevent damage. Punching or hitting the side of a burning block will extinguish the fire block 'attached' on that side. Hitting fire with a tool does not use up any uses for the tool. Placing water, sand, or gravel on the fire will also extinguish it. A player on fire can jump into water to extinguish themselves or use a bucket of water as a portable fire extinguisher by dumping the water at their feet to put out the fire instantly.

Netherrack, a block found in the Nether, will burn forever when set on fire, unless put out by lava, water or the player. It can therefore be a useful trap or defense material around the player's shelter; though the player should be reminded that while this is quite effective at killing hostile mobs, it's also a potential danger to passive mobs, the player themselves, and any dropped items that fall in the fire will be lost.

Lit Netherrack can be used as an alternative to torches. If the player is running low on coal, they can use Netherrack and flint and steel instead. Netherrack fire is brighter than a torch, and can be quickly extinguished. Note that rain won't put out Netherrack fire.

Bedrock in the end will also burn eternally.