Fire is a non-solid block. It has an animated face on all four sides, and two faces on the inside at slants. Fire is never created naturally when chunks generate, except in the Nether. It is created when a player uses flint and steel or a fire charge, a ghast's fireball attack hits a surface, lava burns a flammable object, or lightning strikes a flammable block. Fire emits pixelated gray smoke while it is burning, and produces 15 units of light.

No longer possible as of Java Edition 1.8 due to the fire item being removed; the only way to obtain it in Bedrock Edition is through inventory editors. 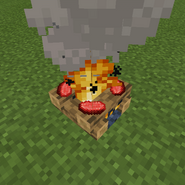 Fire on a campfire. 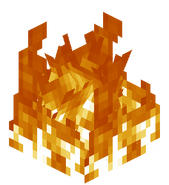 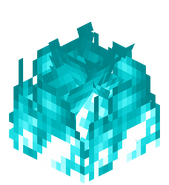 still soul fire
Add a photo to this gallery
Retrieved from "https://minecraft.fandom.com/wiki/Fire?oldid=214438"
Community content is available under CC-BY-SA unless otherwise noted.