A fence is a translucent wood. The fences are used for flowe bedsor farms and can also be found in villages

Fences have a 1.5 block tall hitbox, meaning they cannot be jumped over by a player or mob, unless the mob is a horse, has Jump Boost, or is standing on a slab. A fence block becomes a wooden pole when there is no block directly next to it. If a block is placed next to it, they will connect to each other, extending the hitbox horizontally. A gate can be used to continue a fence line, while granting players access to the other side.

Fences come in a variety of colors, depending on the type of wood planks of which they are made.

Fences are found in NPC villages, where they act as small enclosures around some of the houses, on roofs of some houses, pillars for wells, lamp-posts with a block of black wool placed on it, or in houses with a pressure plate placed on top of it, forming a table-like structure.

Fence blocks also appear in abandoned mineshafts, where they form part of the support beam structures.

Dark oak fences generate as part of pillager outposts as of 1.14 - Village and Pillage.

Wooden fences can generate as part of shipwrecks.

A fence can also be created in a crafting table, by arranging the components in the manner detailed below.

A fence's primary use is enclosing an area. It functionally serves to keep mobs and players either inside or outside. This is because fences are 1.5 blocks tall to players and mobs (although they appear to be only 1 block tall). A large area can be made resistant to hostile mobs, by enclosing it with an unbroken fence line, and lighting the inside portion heavily. This keeps any monsters from spawning within the fenced area, and keeps most hostile mobs that spawn outside, from coming in. A notable exception is spiders, which can climb over a fence. However, fences can be "spider-proofed" by placing a normal block on top of a two-block-tall fence. The spider will hit the bottom of the block when climbing the fence, and fall back down. Fences cannot always protect players from skeletons either; While a skeleton is unable to cross a fence, it can still shoot arrows over it. This risk can be lessened, by making a fence two or more blocks tall. Torches can be placed on top of fences, creating a well-lit, safer perimeter.

Fences can also be used as railings, especially on the edges of balconies, or floating platforms. Since fences cannot be jumped over accidentally, this keeps players and mobs from falling off, while still allowing them to easily see past the fence. Fences can be used as an anchor for animals, if they are attached to a lead.

Fences can be smelted as fuel in a furnace, smelting 1.5 blocks per fence; however, this is inefficient, as it costs five planks worth, and one plank also smelts 1.5 blocks.

A Fence can be harvested with any tool or by hand, but an axe is the fastest.

Fences in a Farm

Fences In a mineshaft

Different types of fences as well as planks and doors 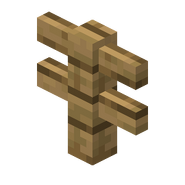 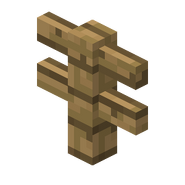 The old texture of the oak fence.
Add a photo to this gallery

Retrieved from "https://minecraft.fandom.com/wiki/Fence?oldid=199036"
Community content is available under CC-BY-SA unless otherwise noted.