Edit
watch 28:07
Minecraft Interactive Experience
Do you like this video?
Play Sound
This article is about the block. For farms in villages, see Farm. For the practice of producing resources, see Farming.
Farmland 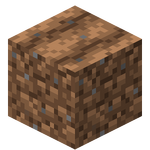 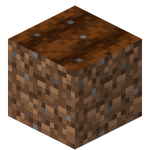 Farmland is a block on which seeds, root vegetables, and most saplings can be planted and grown.

When mined (even with a Silk Touch tool), farmland drops dirt. In Java Edition, it can be obtained from the inventory only by using commands, or by the Creative inventory or the pick block control.

A player may create a block of farmland by using a hoe on a dirt block, grass block, or dirt path.

Farmland is required to grow six of the game's types of crops.

In Java Edition, acacia saplings don't grow on farmland and 2×2 trees cannot be grown if the northwest sapling is on farmland.

In Bedrock Edition, 2×2 giant spruce trees and giant jungle trees don't grow if the northwest sapling is on farmland.

Ladders and torches cannot be attached to the side of a farmland block. Farmland is a partial block (15/16th of a block in height) and so mobs cannot spawn on it.

A farmland block is created dry, and eventually reverts back to dirt if not hydrated and nothing is planted on it.

For farmland to become hydrated, water must be present:

Farmland can also be hydrated by rain.

Different types of seeds grow faster on hydrated farmland than on dry farmland. Hydrated farmland yields a fully developed wheat crop in a little over a single day/night cycle.

Farmland eventually decays into normal dirt if is dehydrated and nothing is planted in it. Additionally, a farmland block becomes a dirt block, regardless of its state of hydration, if any of the following occur:

When farmland decays, any crops growing on the block are dropped as items, as if they were harvested.

A ravager does not turn farmland to dirt when stepping on it, but it does destroy all crops.

Issues relating to "Farmland" are maintained on the bug tracker. Report issues there.