Farming is a feature all game modes possess which involves planting, growing and harvesting crops. It can also refer to the act of taming and/or breeding animals.

Plants grow slowly from seed or immature plant, into their respective fully-grown plant, which can then be harvested by a player. Most crops can be planted on farmland and harvested by left-clicking the fully grown plant. When harvested, a plant (wheat, beetroot, pumpkins, and melons) drops seeds in addition to their crop, which can be planted to grow more of that plant, continuing the cycle.

Animals are typically tamed and bred by feeding the animal a particular food. Breeding requires the animal to be in close proximity to another adult of its own species.

When bees are nearby, they can have the effect of bonemeal, allowing a plant to increase the growth stage by 1.

The types of plants that can be cultivated and reproduced include:

The types of animals that can be tamed and/or bred are:

In order to create a farm, first, a player must dig a hole in the center of the area they want their farm to be. Then, from the center, till the grass/dirt blocks around the hole in a 4x4 block area which can be done by right-clicking on a block of dirt with a hoe equipped. Finally, place water in the hole, and then right-click on the farmland with seeds or spores of a player's choice. 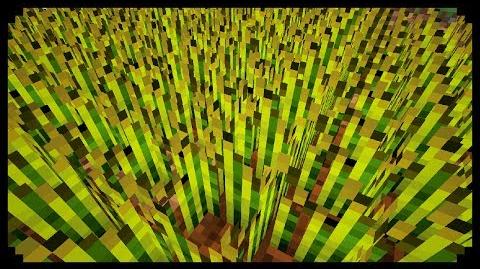 Minecraft How to make a Farm
Add a photo to this gallery
Retrieved from "https://minecraft.fandom.com/wiki/Farming?oldid=192315"
Community content is available under CC-BY-SA unless otherwise noted.