Edit
This article is about a village feature. For methods of producing resources, see Farming. For the block on which crops grow, see Farmland.
Farm 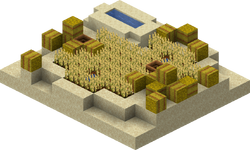 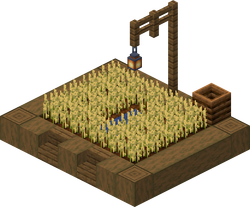 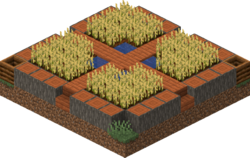 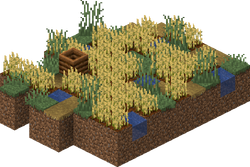 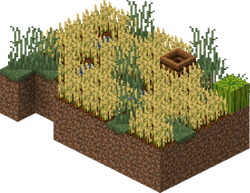 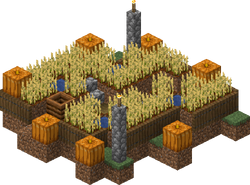 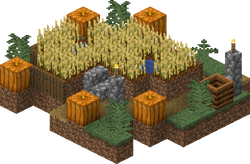 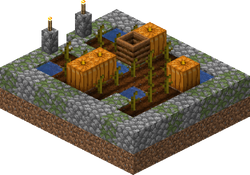 A farm is a generated structure in a village used for growing various crops.

A player may create a working crop farm in any biome in the Overworld or The End. A farm needs only a water source block near to farmland blocks, which are created by using a hoe on dirt blocks. Given sufficient light, seeds or other crops may then be planted on the farmland and grown to maturity for harvesting.

While a village farm is a good ready-made source of food, a village is not required for farming crops. A player with access to water, dirt or grass blocks, and a hoe may create a farm anywhere.

For a typical early-game survival farm, a player uses a hoe to create farmland within four blocks of water, and then plants seeds that were harvested from breaking tall grass. The seeds eventually grow into wheat after a few day-night cycles. Once the crops have matured, they can be harvested and then used for food, trading, leading livestock, breeding livestock, or breeding villagers.

Farms generate in different configurations depending on the biome. Some farms have irregular shapes that can vary from the configurations shown below. As seen on the right, it is possible for a minimal farm to generate naturally with one water block and eight farmland blocks.

As shown in the sections below, additional resources that make up the structure are available beyond the farmland, water, and composter blocks found in all farms.

There are three variants of farms found in desert villages:

There are two types of farms found in plains villages:

There are three types of farms found in savanna villages:

There are two types of farms found in snowy tundra villages:

There are three types of farms found in taiga villages:

in Bedrock Edition, these structures also generate in the snowy taiga village variant, and are topped with snow layers wherever there is sky access.

This list is incomplete; you can help by expanding it.