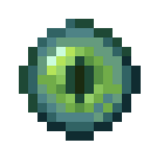 An eye of ender is a craftable item used to locate strongholds and activate the end portals within them.

To locate strongholds (and the end portals they house):

Note that the eyes may point to an incorrect location if the target chunks were generated with a different biomes map in an older version or through different generation settings.[1]

Once an end portal is found, the eyes of ender are required to activate it. End portals require a total of 12 eyes of ender in order to activate, though each individual frame-block has a 10% chance of containing an eye of ender when generated. Eyes can be placed in empty End portal frames by pressing use on them until the entire ring of 12 is filled, thereby activating the portal. Due to the fact that there is a 10% chance of each individual end portal frame having an eye in it, there is a one out of one trillion chance of every frame having an eye in it thereby activating the portal even if the player doesn't have any eyes of ender.

The purple particles left by ender eyes have entity data that define various properties of the entity.

Note: This video does not mention that eyes of ender can be used to craft ender chests or end crystals.

Issues relating to "Eye of Ender" are maintained on the bug tracker. Report issues there.