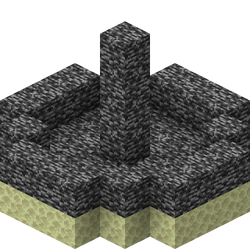 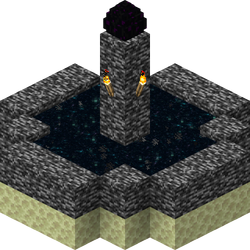 The exit portal (also known as the end fountain) is a structure that enables the player to return to their spawn point, activating upon each defeat of the ender dragon.

The exit portal always generates at the coordinates 0,0 in the End biome, and is de-activated whenever an ender dragon fight is in progress. The y-level of the portal is determined by the height of the terrain, placing the portal blocks at the y-level of the highest block found at 0,0. If the exit portal spawns at the top of the world, the portal blocks are the highest blocks generated, with the top 3 blocks of the bedrock pillar failing to generate due to the maximum build height having been reached. If there are no blocks at 0,0, then the portal generates out of bounds, and only the top 3 blocks of the bedrock pillar generate.

The exit portal looks similar to the end portal but differs in its design. Instead of a frame of end portal frame blocks, it has a 7-block wide bowl-shaped frame of bedrock, and a central pillar of bedrock with a torch on each side. A dragon egg generates atop the pillar upon defeating the ender dragon for the first time.

There are 16 end stone blocks, one under each outer bedrock block, as well as four torches. If any of the blocks are removed, they regenerate when the ender dragon is defeated or respawned. (Note: the torches are attached to the central second-to-the-top block of bedrock

The portal returns the player to their spawn point. The credits roll when a player enters an exit portal for the first time.

If an entity other than a player goes through, like falling sand or thrown items, it is sent to the world spawn.

Using custom world generation, if the end biome appears around the origin in the Overworld, the Nether, or a custom dimension, then the exit portal appears at 0,0 with the portal blocks in place. However, instead of taking the player to their spawn point, the portal takes them to the End dimension.

Issues relating to "Exit portal" are maintained on the bug tracker. Report issues there.