Edit
watch 28:07
Minecraft Interactive Experience
Do you like this video?
Play Sound
Not to be confused with Villager or Pillager.

This page would benefit from the addition of more sounds.
Please remove this notice once you've added suitable sounds to the article.
The specific instructions are: additional celebrate sounds.

This article is a work in progress.
Please help in the expansion or creation of this article by expanding or improving it. The talk page may contain suggestions.
Note: Evoker attack data in Java edition.(e.g:Attack cooldown)
For the miniboss in Minecraft Dungeons, see MCD:Evoker.
Evoker 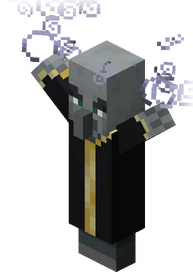 An evoker is a spell-casting illager found in woodland mansions and raids, and is the only source of the totem of undying.

Individual evokers spawn during the generation of particular woodland mansion rooms. They do not respawn after their initial spawn.

Evokers spawned with mansions do not naturally despawn (unless the world is switched to Peaceful mode‌[JE only]).

In Bedrock Edition, evokers can spawn as passive mobs in peaceful difficulty.

Evokers can spawn during raids by themselves or riding ravagers. Evokers cannot spawn in raids in easy difficulty, because such raids have only three waves, while evokers appear in the fifth wave and above.

They may also rarely spawn as a raid captain.‌[JE only]

When idle (not attacking), an evoker crosses its arms similar to a villager, but unlike vindicators an evoker does not show its hands.

Evokers attack players, adult villagers, iron golems, snow golems,‌[BE only] and wandering traders within 12 blocks by waving both of their arms while looking at their target and summoning evoker fangs or vexes. They are neutral toward every other mob except illagers, which the evoker is passive to, even when hit by one. If a llama, a wolf, or another hostile/neutral mob is caught in the attack, it retaliates on the evoker, causing the evoker to be hostile to them.

If the player is within a 10 block radius and the evoker is not in the middle of summoning an attack, the evoker flees from the player to avoid being attacked.

An evoker visually does not sit down when sitting in a boat or minecart. If an evoker is riding a ravager, its legs appear to sink in the ravager's body. This only happens in Bedrock Edition as in Java Edition evokers put their legs in front of them while sitting on any boat or entity.

Like shulkers and vindicators, evokers are passive on peaceful difficulty.‌[Bedrock Edition only]

Evokers can walk as fast as the player's sprinting speed, but mostly stay in the same spot if not provoked by any villagers or iron golems. Giving the evoker a slowness effect with an amplifier of 2 causes the evoker to walk as slow as the other illagers.

Evokers stare at the player in creative mode, just like villagers. The evoker might break the line of sight with the player if it starts summoning or when it sees a target and runs towards the target.

In Java Edition, any evoker can join a patrol if sufficiently near a patrol captain, although evokers do go seeking out for patrols.

In Java Edition, evokers and illusioners gains high movement speed without any effect during raids.

The evoker signals this attack by producing dark purple particles () and a low-pitched horn-like sound. A number of fangs rise out of the ground around the player, then snap shut and vanish. Players or mobs caught in the attack are dealt 6

damage, regardless of difficulty.‌[JE only] This damage is not mitigated by armor but is mitigated by enchantments such as Protection. Other illagers (ravagers take damage from evoker fangs in Java Edition since it's not an illager, but won't fight back if damaged) caught in the attack do not take damage, and the evoker doesn't take damage from the fangs or from another evoker's fangs.

Any evoker-summoned fangs do not deal damage to any illagers, although fangs summoned or spawned by the player do.

Fangs appear no lower than the feet of the lowest combatant and no higher than one block above the feet of the highest combatant. Fangs attempt to appear on the highest opaque block between those two extremes, but fail to spawn if they are obstructed by a solid block. In practice, this means that fangs cannot spawn inside deep pits or on top of high walls, but may, for example, go up a staircase if the target is at the top and the evoker at the bottom, or vice versa. Likewise, an evoker floating in a boat on water cannot summon fangs against a player swimming or floating in a boat because there are no opaque blocks from which the fangs can appear.

The evoker typically summons its fangs in a straight line toward the target, but if the target is close enough to the evoker, the evoker summons them in two circles around itself. The player can dodge the fangs, as they do not chase the player. Summoning fangs resets the evoker's spell cooldown to two seconds, and resets the cooldown for summoning fangs to five seconds.

Evokers look at the mob/player they are attacking with evoker fangs when they summon the evoker fangs.

The evoker signals this attack by producing white particles () and a higher-pitched horn-like sound. Three vexes appear nearby. The evoker can summon vexes as long as there are fewer than eight vexes within 16 blocks centered on the evoker. This spell resets the evoker's spell cooldown to five seconds, and resets the cooldown for summoning vexes to 17 seconds.

Evokers look at the mob/player they are telling their vexes to attack when summoning vexes.

In Bedrock Edition, the spell takes substantially longer to complete than in Java Edition.

Unlike Bedrock Edition, Evokers sometimes can summon two circle fangs while summoning vexes, without any cooldown. It usually happens when player closely attack an evoker when it summoning vexes.

While the evoker is not engaged in combat and /gamerule mobGriefing is set to true, it changes the wool color of any blue sheep within 16 blocks from blue to red. It signals the spell by producing orange particles () and making a "wololo" sound. This spell resets the evoker's spell cooldown to three seconds, and resets the cooldown for the sheep color conversion spell to seven seconds.

In Bedrock Edition, evokers can still change a sheep's color when /gamerule mobGriefing is set to false.

Evoker fangs are the entities that evokers use to attack the player with their fang attack.

The individual fangs in an evoker's fang attacks each have a delay. Before the delay is over, the fangs cannot be seen, although unlike truly invisible entities, fangs in warmup still have a visible debug hitbox. After the delay, the fangs expand into existence, snap shut, make critical hit particles, and shrink out of sight again, dealing 6

magic damage to all mobs standing on the spot. Naturally spawned fangs do not harm illagers, but player-spawned ones do.

Killing an evoker fang does not contribute to the Monster Hunter advancement/achievement.

Evoker fangs are not affected by Peaceful difficulty.

Evokers have entity data associated with them that contains various properties.

Evoker fangs have entity data associated with them that contains various properties.

Issues relating to "Evoker" are maintained on the bug tracker. Report issues there.