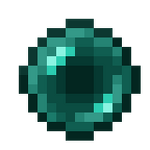 An ender pearl is a item dropped by Enderman used to teleport and to make an eye of ender.

Endermen have a 50% chance to drop 1 ender pearl when killed. The drop is increased by 1 per level of Looting, with a maximum of 4 with Looting III.

A trapped chest always containing 2 ender pearls can be found in the "fake end portal" room of woodland mansions.

In Java Edition, expert-level cleric villagers have a 2⁄3 chance to sell an ender pearl for 5 emeralds.

Ender pearls can be thrown by pressing use. After it is thrown, the ender pearl is consumed, and the player teleports to where it lands, taking 5

Ender pearls have a small cone of travel; they do not all follow the same path when thrown in the same direction. The direction and velocity of ender pearl throws is slightly randomized.

Ender pearls can travel about 30 blocks‌[Java Edition only]/45 blocks‌[Bedrock Edition only] when thrown straight up, and up to 54 blocks forward when thrown at an optimum launch angle of ~35° (on even ground).

The thrower's vertical velocity influences the throw. Hence timing a throw with a jump can increase the throwing range to 42 blocks when thrown straight up and 64 blocks forward at a 35° angle. Throwing while falling significantly decreases the range.

Ender pearls that fall into the void disappear, and do not trigger the player to teleport. However, ender pearl entities (instead of dropped items) are not destroyed by lava and will teleport the player to the bottom of lava pools/lava oceans.

Ender pearls have a cooldown of one second before they can be used again. The cooldown is shown in the hotbar by a white overlay on the ender pearl that shrinks and must disappear before the player can use it again. If there are other inventory or hotbar slots containing ender pearls, they are covered with the white overlay as well.

Ender pearls can be thrown into End gateways to reach the outer islands of the End.

Ender pearls can be thrown into Exit portal to reach the player's spawn point.

Ender pearl teleportation makes no sound itself‌[Java Edition only], but does emit a "small fall" sound at the destination when applying teleportation damage to the player.

An ender pearl has a 5% chance to spawn an endermite when it lands. This is the only way through which endermites can spawn, without using cheats. The endermite spawns at the players position when the pearl lands, not at the pearl's landing site.

Thrown ender pearls have entity data that define various properties of the entity.

Issues relating to "Ender Pearl" are maintained on the bug tracker. Report issues there.