The Ender dragon is a gigantic flying hostile boss mob found when first entering the End. She is the largest naturally spawning mob in the game and is widely acknowledged as the final boss of Minecraft.

The Ender dragon spawns immediately when an entity first arrives in the End.

This image shows how the player can arrange end crystals to respawn the Ender dragon.

If a dragon goes through an End gateway, another immediately spawns at (0, 128, 0 ) while the other dragon stays on the outer End islands until the chunks get loaded. [verify]

Once slain, the Ender dragon slowly ascends, her wings and body becoming more tattered until she disappears, while beams of light erupt from her center. There's an explosion of 12,000 experience points (ten drops of 960 and one drop of 2400) — enough to bring a player from level 0 to level 68. In subsequent completions of the Ender dragon fight (after she is re-summoned via the End crystals), only 500 experience points are dropped. In Java Edition, the slain Ender dragon flies back to the central and tatters into nothingness. In Bedrock Edition, the slain Ender dragon stays where she is slain and tatters into nothingness.

Every completed dragon fight also creates an End gateway portal floating within 75–100 blocks of the exit portal, up to a maximum of 20 gateway portals.

During the battle with the Ender dragon, unique music called "Boss" plays. This happens for as long as the player fights the dragon, except when there is no player within 190 blocks from (0, 128, 0).

The Ender dragon has a light purple health bar that appears at the top of the player's screen. Her health is frequently restored by nearby End crystals, indicated by a magical white beam connecting the dragon and the crystal. Destroying an End crystal that is actively healing the dragon causes 10

The dragon can take damage only from explosions and player based damage, and takes damage of (1⁄4 × normal damage + 1) when hit on any part that is not her head. Suffocation is completely non-applicable, as she either phases through or immediately destroys any block she touches.

The dragon is immune to all status effects excluding instant damage, which still damages her if you throw the splash or lingering potion of harming at the top bedrock block of the exit portal.

The green hitboxes of the Ender Dragon.

By using the F3 + B shortcut, the dragon's bounding box appears.‌[Java Edition only] She cannot be damaged at just any spot in this large volume: eight green sub-hitboxes are also shown, which indicate the locations where the dragon can take damage: The tail, body, head, and wings.

The Ender dragon is a flying mob, which cannot actually stand on the ground. She flies around the end main island while fighting the player.

The dragon can pass through all blocks, destroying almost all types, but can still be affected by flowing water, lava and Bubble Column. Blocks not destroyed are those that naturally generate on the central End island and those that are intended to be indestructible, except for crying obsidian and respawn anchors:

Destroyed blocks are not dropped, although containers (such as chests and dispensers, but not shulker boxes) drop their contents. 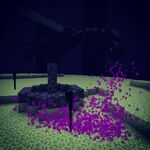 The dragon "bathing" endermen with her toxic breath attack.

The dragon never targets any entity but the player. Other mobs may turn hostile to the dragon when struck. Any entities hit by her wings are dealt 5

damage if hit by her head), and in Java Edition, are thrown into the air, sometimes to fatal heights or even off the island. Neither of these effects is applied for 1⁄2 second after the dragon takes damage.

The Ender dragon has four main states of behavior:

Guarding
The dragon begins in this state, circling the ring of obsidian pillars on either the outside if there are still End crystals or the inside if the crystals are destroyed.
With each crystal's destruction, she takes damage and there is an increased chance of the dragon switching states.

Targeting
Whenever the dragon finds herself less than 10 blocks or greater than 150 blocks from her current target, she attempts to choose a new target. When damaged she targets a point just behind herself, causing her to turn away and choose a new target.

Strafing
Upon the destruction of an End crystal, the dragon switches to strafing. As soon as she is within 64 blocks, she shoots a fireball at the player.
The dragon resumes circling after this state.

Diving
The dragon dives onto the target player's position, taken at the start of the dive.
The dragon resumes circling after this state, whether or not she actually hit the player.

Perching
The dragon goes to the exit portal structure (approaching from the side opposite the player if possible) and lands on the highest block of the coordinates (x=0, z=0) up to (y=101).[verify] If there is no block in (x=0, z=0) the dragon freezes right when she switches to perching.[verify] The dragon is immune to arrows in this state; they all catch fire and bounce off. In Java Edition she is also immune to thrown tridents in this state.

Dragon's Breath
Unless the player is in Peaceful difficulty, after 1.25 seconds, if a player is within 20 blocks of the exit portal structure, the dragon roars and use her 3-second breath attack, damaging players similarly to a lingering potion of Harming.
The purple clouds emitted from the dragon's breath attack can be collected in an empty bottle to obtain dragon's breath.
Charge
If the player is not near the portal within 5 seconds of the dragon's landing, she charges at players within 150 blocks.
Take-off
After four consecutive breath attacks, or if the dragon fails to locate a player within 150 blocks, she takes off from her perch. She always takes off in Peaceful difficulty, making it difficult to land melee hits.
The dragon resumes circling after this state.
Escape
If cumulative damage taken while perched exceeds 50

× 25, the dragon takes off and resets the damage accumulator. The accumulator is not reset if she does not take enough damage.
The dragon resumes circling after this state.

When the dragon finally takes a fatal blow, she flies toward the exit portal structure before dying, unless she cannot find it within 150 blocks, or it is inside blocks.‌[Java Edition only]

Dragon fireballs are special fireballs that the Ender dragon fires while strafing. They cannot be deflected unlike ghast fireballs, and they do no impact damage. Instead, they deposit purple clouds across the ground, similar to a lingering Potion of Harming. As with her close-ranged breath attack, the purple fog can be bottled to obtain the dragon's breath.

Ender dragons have entity data associated with them that contain various properties.

Dragon fireballs have entity data associated with them that contain various properties.

A dragon fireball spawned by a command (Left) and the damage and the explosion it caused (Right).

The /summon ender_dragon command, by default, summons a harmless Ender dragon that hovers in place ‌[JE only]. Setting the DragonPhase tag (by issuing either the /summon ender_dragon ~ ~ ~ {DragonPhase:0} or the /data merge entity <selector> {DragonPhase:0} commands) starts the Ender dragon's ordinary behavior, although the health bar does not appear because it is managed by the End's dragon fight status rather than by the dragon entity herself ‌[JE only]. If spawned away from the center of the map (x=0, z=0), she flies to the center then resumes normal behavior (see #Behavior).

This section would benefit from the addition of more images.
Please remove this notice once you've added suitable images to the article.
The specific instructions are: Ender dragon before 19w39a and 19w41a

Issues relating to "Ender Dragon" are maintained on the bug tracker. Report issues there.