An End Crystal is a type of pseudo-block (tile entity) that can be found in limited numbers but naturally in The End. They are situated on top of large and tall towers made of Obsidian, on top of a half-block of Bedrock. They are able to be crafted as of 1.9 - The Combat Update, and they are easy to break, only requiring to be hit by any attack. However, the Ender Dragon's flying through it does not count for this. Destroying it will cause a large explosion that will kill a Player unless they are properly protected. This can cause damage to the ender dragon, both from the direct explosion and the beam, but this can only occur if the crystal is currently healing the dragon, and any other mob that was also close enough to the detonation, which is similar to that of a charged Creeper. Due to the fact that they are on a tall structure, sometimes exceeding 30 or more blocks high, the explosion will likely knock players off the tower to a fatal fall. The end crystals slowly heal the ender dragon if it is within large proximity to it.

It is worth mentioning that the end crystal is an entity and not a block. Therefore, it has a hit-box mechanic and health. However, its health is effectively 0 hearts, which means that any form of hostile actions, even those which do not cause damage, will destroy the entity. This is demonstrated by the fact that Eggs, which do not cause damage to most mobs, can destroy it. An ender crystal can be spawned using the /summon command, or it can be placed down after being crafted.

Destroying an end crystal causes a large explosion, almost the size of a charged Creeper, so it is best to destroy it with a ranged attack; the use of eggs snowballs, arrows and other ranged equipment is acceptable. When an ender dragon gets near the crystal, it will start to heal the damage it took. However, if the ender dragon comes into contact with the end crystal, it will blow up and damage the ender dragon. When a crystal charging the ender dragon is destroyed, the dragon will take 10 damage. Despite being only naturally spawned in the End, it's possible to craft them and place them on Obsidian and Bedrock. However, they will not have the bedrock slab, as that is only possible to achive with the /summon.

An upper view of an Ender Crystal with the Ender Dragon healing itself.

Close view of an Ender Crystal.

End Crystals respawning the Ender Dragon and the crystals on the pillars. 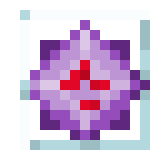 New texture of the item. 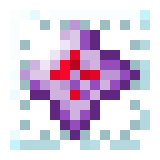 Old texture of the item.

The animated item texture of the End Crystal.
Add a photo to this gallery
Retrieved from "https://minecraft.fandom.com/wiki/End_Crystal?oldid=227458"
Community content is available under CC-BY-SA unless otherwise noted.