The enchantment table is an interactive block used to enchant certain items using experience points. Items that can be enchanted include: swords, pickaxes, shovels, axes, bows, books, fishing rods and armor. Enchantment tables alone typically have upgrades ranging from two to seven experience levels. If a player is within a certain range, the book on the table will open, face a player, and flip pages every several seconds. As of update 1.8, lapis lazuli is required to enchant items.

The chance of getting a better enchantment can be increased by placing bookshelves around the table. Only bookshelves that are two blocks away will add enchantments. When placed correctly, an animation of floating symbols moving into the book entity will occur. The text is written in the Standard Galactic Alphabet from the Commander Keen series. The ideal position of bookshelves is a square of 15 placed in a 5x5-block outline, with the enchantment table in the middle. 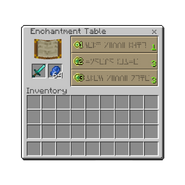 The Enchantment Table on Bedrock Edition.

The Enchantment Table with the updated textures. 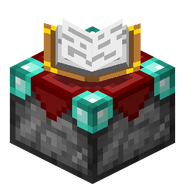 The book on the table.
Add a photo to this gallery
Retrieved from "https://minecraft.fandom.com/wiki/Enchantment_Table?oldid=219577"
Community content is available under CC-BY-SA unless otherwise noted.