An enchanting table[a] is a block that allows players to spend their experience point levels to enchant tools, weapons, books, armor, and certain other items.

An enchanting table requires a pickaxe to be mined, in which case it drops itself. If mined without a pickaxe, then the mining is slower and it drops nothing.

Enchanting a book produces an enchanted book, which does nothing on its own, but effectively "saves" the enchantment for later application to another item with an anvil.

The enchanting table is 3⁄4 blocks high.

If an enchanting table is placed on ice, the player slides on it as though it is an ice block, just like with slabs.‌[Java Edition only][verify]

Despite comprising largely of obsidian, they are not immune to destruction by the ender dragon, which Mojang Studios has confirmed to be intentional.[1]

The enchanting table's main purpose is to enchant items. The table can enchant all tools, armor and gear except ‌[Bedrock Edition only] shears, flint and steel, carrot on a stick, shield, carved pumpkin, mob head, lead and horse armor; all of these (excluding leads and horse armor) can instead be enchanted using an anvil and an appropriate enchanted book.

Glyphs flowing from the bookshelves animation.

The arcane glyphs that float from bookshelves to the enchanting table and the cryptic runes in the enchanting table's interface are written in the Standard Galactic Alphabet, which is a simple alphabet substitution cipher used in the Commander Keen series of computer games.

The arcane glyphs cannot be seen if "particles" in the video settings is set to "minimal".

The cryptic runes seen in the interface are randomly constructed from the following list of words:

Three to five words are chosen from the list and appended to each other, then displayed in the Standard Galactic Alphabet. The words chosen are random and purely cosmetic: they have no relation to the enchantments to be applied to the item and are not saved on the enchanted item (meaning they say nothing about the spell's identity), and they are displayed only in the enchanting table. Only the cost and one of the enchantments are known.

By default, the GUI of an enchanting table is labeled "Enchant", but this name can be customized by naming the enchanting table in an anvil before placing it or by changing the CustomName tag using the /data command‌[Java Edition only].

Enchanting tables can be placed under note blocks to produce "bass drum" sounds.

An enchanting table has a block entity associated with it that holds additional data about the block. 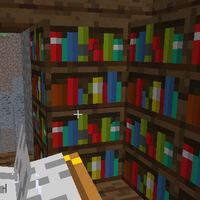