This page describes an education-related feature.
This feature is available only in Education Edition or when enabling the "Education Edition" option in Bedrock Edition.
Element Constructor 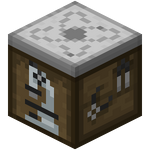 The element constructor is a block used in chemistry. It allows the construction of elements by adjusting the number of protons, electrons and neutrons.

Element constructors cannot be obtained in Survival without commands. In Bedrock Edition, the world must also have “Education Edition” enabled. 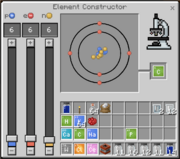 The interface of an element constructor.
Main article: Elements

Using the element constructor opens up an interface with a large display and three adjustable sliders for protons, neutrons and electrons, as well as optional text inputs for each. By moving the sliders or typing in numbers into the text inputs, the large display shows the selected numbers of particles. There is a microscope icon at the left of the interface, and the inventory is shown at the bottom right of the user interface.

Issues relating to "Element Constructor" are maintained on the bug tracker. Report issues there.