Edit
watch 28:07
Minecraft Interactive Experience
Do you like this video?
Play Sound
This article is about the mob in the base game. For the mob in Minecraft Dungeons, see MCD:Elder Guardian.
Elder Guardian 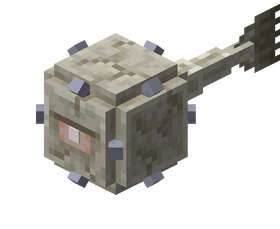 An elder guardian is a stronger and larger variant of the guardian, and it can inflict Mining Fatigue. It is the largest aquatic mob in Minecraft, as well as the strongest. Three of them spawn inside an ocean monument; one in the penthouse room and one in each wing.

Three elder guardians spawn naturally during the generation of each ocean monument: one in the top room of the monument and the other two in each wing section of the monument. They do not respawn after their initial spawn, thus there are a limited number of them per world.

This section would benefit from the addition of more images.
Please remove this notice once you've added suitable images to the article.
The specific instructions are: Animated images of the elder guardian cursing effect, distinct ones for java and bedrock due to animation differences

The elder guardian's eye follows and stares at any nearby players, and always looks directly at its target. The eye still follows a player under the effects of a potion of invisibility or in spectator mode, but doesn't attack.

The elder guardian has three methods of attacking, including firing its laser, inflicting mining fatigue, and a defensive thorn-like attack.

The elder guardian pathfinds toward an ocean monument if it is not within one.

An elder guardian attacks axolotls that are not playing dead. Otherwise, an elder guardian does not attack mobs (such as iron golems) that attack it, although the attacking mob takes damage from the elder guardian's natural spikes defense.

The laser takes several seconds to charge, doing no damage and allowing the player to move away in the meantime. As it charges it turns from purple to bright yellow (thus acting as a warning indicator). Once charged, the beam flashes green, abruptly ends, and deals 12

× 6 damage on hard difficulty. The elder guardian swims around for a few seconds before firing again. The beam cannot be dodged and has a maximum range of approximately 14 blocks. Once the player is out of range, or if the beam is obstructed by solid blocks, the guardian's beam disengages from the player and deals no damage.[more information needed]

When afflicted, the player sees a ghostly image of the elder guardian and hears a ghostly noise. The effect decreases a player's attack speed by 30% and decreases mining speed even more for 5 minutes. The attack targets players through blocks, even underground, and a potion of Invisibility offers no defense. This is not considered an attack in regards to the Thorns enchantment.

The image of the elder guardian is a particle effect that can be recreated by issuing the command /particle minecraft:elder_guardian.‌[Java Edition only]

on hard mode) of damage every time it is hit while its spikes are extended, similar to the Thorns enchantment on armor. If cornered by a player or axolotl, the elder guardian usually extends its spikes and fires at point-blank range.

The elder guardian ghost has the same model and texture as the elder guardian, but uses the player hurt sound, has less health, and is missing the back tail model. When spawned outside of water, it floats upward until it despawns, similar to a mob tied to a balloon, or under a high level of levitation effect, but it passes through blocks.

The elder guardian ghost itself isn't immune to suffocation damage, and drops only experience. It behaves similar to custom mobs added in behavior packs with broken AI; the mobs float upward and pass through blocks when hit.

Elder guardians have entity data associated with them that contains various properties.

Issues relating to "Elder Guardian" are maintained on the bug tracker. Report issues there.