Edit
This article is about chicken eggs. For the similar item that spawns mobs, see Spawn egg. For other uses, see Egg (disambiguation).
Egg 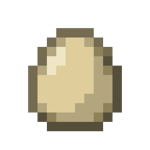 An egg is an item that can be used to craft food items, or as a throwable entity to spawn chicks.

A chicken drops an egg item every 5–10 minutes. The theoretical average would be expected at 1 egg every 7.5 minutes, or 0.1333 eggs per minute.

A fox sometimes spawns holding an egg, which it always drops upon death. Alternatively, a player dropping a food item causes the fox to drop the egg.

Players are able to throw eggs and deal knockback to mobs (but not other players[1]), but no damage is dealt, similar to a snowball. Likewise, throwing eggs at neutral mobs provokes them. Eggs can also be fired from dispensers and are affected by gravity.

Thrown eggs have entity data that define various properties of the entity.

Issues relating to "Egg" are maintained on the bug tracker. Report issues there.