Edit
Not to be confused with MinecraftEdu.
Education Edition 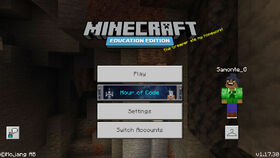 Minecraft: Education Edition is an educational edition of Minecraft specifically designed for classroom use. It is being developed by Mojang Studios and Xbox Game Studios and has features that make Minecraft easy to use in a classroom setting. The full game was released on November 1, 2016.[3] There was a beta test between June 9 and November 1, 2016.

On August 20, 2018, Mojang Studios announced that it would bring Education Edition to iPad in Autumn 2018.[6] Microsoft stated that licensed users would be able to play starting in September.[7] It was released to the App Store on September 6, 2018.

On March 27, 2019, it was announced that the Education Edition in China would be operated by JD.com.[8]

Education Edition is based on Bedrock Edition[10] and contains features that make Minecraft more accessible and effective in a classroom setting, including:

Lesson plans through Education Edition are available to download and are split between certain age groups and various subjects such as history, visual arts, and gaming. Additionally, educators can upload lesson plans that they have created for others to use from the main website.

The full game costs US$5 (CA$?[verify], €4.21, £3.84, AU$6.37, NZ$?[verify], SG$?[verify]) per user per year to use, depending on school size and if qualifications for volume licensing are met. Volume pricing for school-wide deployments and large-scale academic institutions is also planned. Schools and districts that already have MinecraftEdu can get the Education Edition for free.

It was announced on May 2, 2017, that schools and educational institutions that purchase new Windows 10 devices receive a free year of Minecraft: Education Edition.[11]

In order to be eligible to purchase Education Edition, a player must meet the following requirements (as seen on Tech Specs):