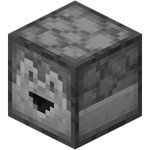 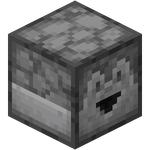 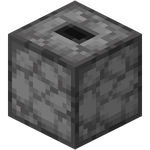 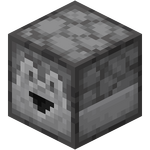 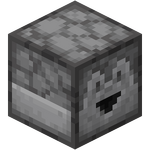 A dropper is a block that can be used to eject items or to push items into another container.

A dropper can be used as a container or as a redstone component to move objects.

A dropper can be placed so that its output faces in any direction, including up or down. When placed, the dropper's output faces toward the player. With default textures, the droppers output side looks like a face when positioned for horizontal output. Otherwise, the output side has a square hole.

A dropper cannot be moved by pistons in Java Edition and water and lava flow around a dropper.

A dropper has 9 slots of inventory space.

By default, the GUI of a dropper is labeled "Dropper". A dropper's GUI label can be changed by naming the dropper in an anvil before placing it, or by using the /data command‌[Java Edition only] (for example, to label a dropper at (0,64,0) "Alice's Dropper", use /data merge block 0 64 0 {CustomName:'"Alice's Dropper"'}).

A dropper can be "locked" (or subsequently unlocked) by setting the dropper's Lock tag with the /data command. If a dropper's Lock tag is not blank, the dropper cannot be accessed except by players holding an item with the same name as the Lock tag's text. For example, to lock a dropper at (0,64,0) so that only players holding an item named "Alice's Key" can access the dropper, use /data merge block 0 64 0 {Lock:"Alice's Key"}.‌[Java Edition only]

A dropper can be used to eject items, or push items into another container.

A dropper can be activated by:

In addition to the methods above, droppers can also be activated by quasi-connectivity.‌[Java Edition only] A dropper activates if one of the methods above would activate a mechanism component in the block above the dropper, even if there is no mechanism component there (even if the block above the dropper is air or a transparent block), but only when the dropper receives a block update (including a redstone update within two blocks of the dropper).

A dropper does not activate if it has been less than 1 redstone tick (2 game ticks, or 0.1 seconds barring lag) since its last activation ended.

When activated, a dropper waits 2 redstone ticks (4 game ticks, or 0.2 seconds barring lag) and then ejects one item from its inventory. The dropper does not continue to eject items while activated — ejection occurs only on the initial activation (the rising edge of an input signal). To eject multiple items, repeatedly activate the dropper with a clock circuit.

If multiple slots are occupied by items, a random occupied slot is chosen for ejection. The slot is chosen when an item is ejected, not when the dropper is initially activated, thus it is possible to move items into or out of a dropper between its activation and item dispensing.

If the dropper is facing a container, the ejected item is transferred into the container. Otherwise, the item is ejected in the direction the dropper is facing, as if a player had used the Drop control. Even items that would be treated differently by a dispenser (such as arrows) are simply ejected by a dropper.

A dropper makes a clicking noise (the random.click sound event) when activated empty or when ejecting items into air, but is silent when it successfully transfers an item into another container.

A dropper is an opaque block, so powering it directly can cause adjacent mechanism components (including other droppers) to activate as well.

Dropper can be placed under note blocks to produce "bass drum" sound.

In Bedrock Edition, a dropper's block data specifies its orientation and activation status:

A dropper has a block entity associated with it that holds additional data about the block.

Issues relating to "Dropper" are maintained on the bug tracker. Report issues there.