This feature is exclusive to Java Edition.
Dolphin's Grace 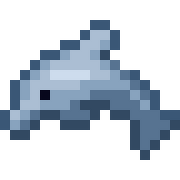 Dolphin's Grace is a status effect that increases the player's swimming speed when a dolphin is nearby and following the player.

Dolphin's Grace significantly decreases the amount of "friction" from moving through water. This causes the player to swim significantly faster and lose speed at a slower rate, but also makes changing directions slower. Dolphin's Grace on its own allows you to travel 9.8 m/s underwater without Depth Strider, making it faster than a boat. Combining it with Depth Strider, players are able to travel at much higher speeds, adding 8.983 m/s per level. Potentially higher speeds are possible by adding soul soil underwater and using Soul Speed-enchanted boots, along with Speed II.

This section is missing information about Is the icon present in bedrock edition?.
Please expand the section to include this information. Further details may exist on the talk page.

Issues relating to "Dolphin's Grace" are maintained on the bug tracker. Report issues there.