Edit
watch 28:07
Minecraft Interactive Experience
Do you like this video?
Play Sound
For other uses, see Dirt (disambiguation).
Dirt 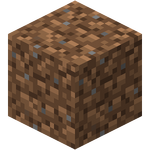 Dirt is a block found abundantly in most biomes under a layer of grass blocks at the top of the Overworld.

Dirt is found at any altitude, and comprises the majority of the upper terrain layers in most Overworld biomes, bridging the gap between stone and grass blocks in various thicknesses.

Dirt can generate in the Overworld in the form of blobs. Dirt attempts to generate 15 times per chunk in blobs of size 0-160 at any level Y=0 or above in all biomes. It can replace stone, granite, diorite, andesite, tuff, and deepslate.

Dirt drops as an item when broken with any tool or by hand, but a shovel is the quickest way to break it.

An enderman drops a dirt block upon death, if holding one.

Farmland turns into dirt if either a mob jumps on it, a solid block is placed over it, or if nothing is planted on it and it is not within four blocks of water.

Dirt path immediately turns into dirt if a solid block is placed over it.

Coarse dirt can be tilled with a hoe to become dirt.

Tilling rooted dirt with a hoe turns it into normal dirt, and yields a hanging roots item.

Grass blocks and mycelium can die under various circumstances. When they die, they turn into dirt.

By tilling coarse dirt, the player can convert gravel into dirt. Two blocks each of gravel and dirt become four blocks of coarse dirt, which can then be placed and tilled. Since gravel is renewable through bartering with piglins, this makes a renewable source of dirt.

In Java Edition, another way to obtain renewable dirt makes use of moss blocks. Since large spruce trees can convert moss blocks into podzol, and moss can be grown on renewable stone (generated with water and lava), dirt can be renewably created as long as there is access to water, lava, moss, spruce saplings and bone meal. Azalea can also convert moss blocks into rooted dirt when grown into a tree, but since only one block is converted at a time, it is much less efficient than large spruce trees.

A third way to obtain renewable dirt is by buying podzol from wandering traders. However, only 18 blocks of podzol can be purchased from each trader, so this method cannot be performed on a large scale.

Dirt's primary use is for farming, but it can also be used as a highly available building block.

Dirt has the ability to grow saplings, sugar cane, mushrooms, sweet berries, and bamboo, which can be planted directly in dirt under appropriate conditions.

Using a hoe on dirt turns it into farmland, enabling wheat seeds, pumpkin seeds, melon seeds, potatoes, carrots and beetroot seeds to be planted on it.

Using a shovel on dirt turns it into a dirt path.

Mycelium spreads in a similar fashion, but requires a light level of at least 9.

Issues relating to "Dirt" are maintained on the bug tracker. Report issues there.