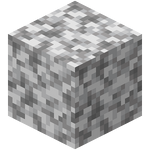 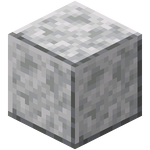 Diorite is a block of igneous rock, found in large pockets in the ground.

Polished diorite is the polished version of diorite.

Diorite can be mined using any pickaxe. If broken without a pickaxe, it drops nothing.

Journeyman-level stone mason villagers have a 1⁄3 chance to sell 4 polished diorite for an emerald.

Diorite is currently used only for decoration. It has the same blast resistance as stone, meaning it can be used as a substitute for stone when building.

Journeyman-level stone mason villagers have a 1⁄3 chance to buy 16 diorite for an emerald.

Diorite and polished diorite can be placed under note blocks to produce "bass drum" sound.

Issues relating to "Diorite" or "Polished Diorite" are maintained on the bug tracker. Report issues there.