Edit
watch 28:07
Minecraft Interactive Experience
Do you like this video?
Play Sound
This article is about the detector rail. For other types of rails, see Rail (disambiguation).
Detector Rail 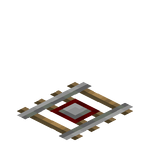 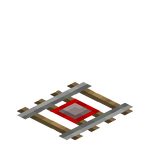 A detector rail is a block that can transport minecarts and can be used as a switchable redstone power source.

A detector rail also drops as an item if:

A detector rail can be used as a rail that can detect when minecarts are on it or how full container minecarts on it are.

To place a detector rail, use the Place Block control on the face of a block adjacent to the destination space.

A detector rail can be attached to:

Mobs avoid walking across a detector rail (or other rails), but can be pushed onto them.

It cannot be placed suspended in midair, even with commands, which is intentional.[1]

A comparator can read the contents of a minecart with hopper or with chest on a detector rail through a solid opaque block, as it can with other container blocks.

Issues relating to "Detector Rail" are maintained on the bug tracker. Report issues there.