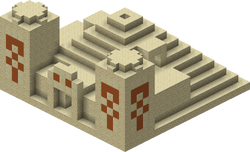 A desert pyramid, colloquially called a desert temple, is a sandstone structure sometimes generated in deserts, where a hidden fosse containing loot is protected by a TNT trap.[1]

Desert pyramids are uncommon and may generate in deserts.

In the center of the pyramid's 21×21 ground floor is a checkerboard pattern of terracotta and sandstone as a wind rose symbol, with a block of blue terracotta in the center. Underneath this terracotta is a secret room, the fosse, containing four chests, which are rigged by a stone pressure plate directly under the blue terracotta block. The pressure plate is connected to a 3×3 grid of TNT, which means that if a player or mob unintentionally steps on the plate, it sets off the nine TNT blocks, which destroy the chests and their loot.

As there is no light in the fosse, mobs sometimes spawn inside and trigger the TNT trap, destroying the chests and loot before any player can reach it.

When a desert pyramid generates above a canyon (ravine), it has a deeper foundation.

In Java Edition, each desert pyramid chest contains items drawn from 2 pools, with the following distribution:

In Bedrock Edition, each desert pyramid chest contains items drawn from 2 pools, with the following distribution:

The loot chances above are per chest, and there are four chests. Each chest has a 2.6% chance of an enchanted golden apple, but with four chests, each pyramid has a 10% chance of having at least one for example.

Issues relating to "Desert pyramid" are maintained on the bug tracker. Report issues there.