A Desert Temple, or Desert Pyramid, is a naturally generated structure found in Desert Biomes.

Desert pyramids are primarily built out of the three types of sandstone, sandstone stairs, and orange and blue Terracotta. On the towers in front, the orange terracotta formations resemble an Egyptian symbol, the Ankh. The main room of the pyramid contains a blue terracotta block in the center, and if this block is broken, it will reveal a treasure room containing 4 chests with the treasure in them. However, directly below the location of the blue terracotta, at the bottom of the treasure room, is a pressure plate wired to 9 blocks of TNT under the floor.

Because of the TNT trap in the treasure room, one will have to come up with a strategy for collecting the treasure safely. It's recommended one does not break any of the 8 sandstone blocks surrounding the blue terracotta block, because below them are straight drops to the bottom, which may send one to one's death if one falls. Here are some ways possible to get the treasure:

In addition, nine TNT can be found by mining the smooth sandstone under the pressure plate if the trap is disabled. Also, the Pressure Plate and the Chests can be obtained by simply breaking them. 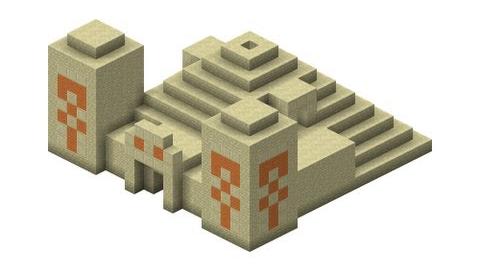 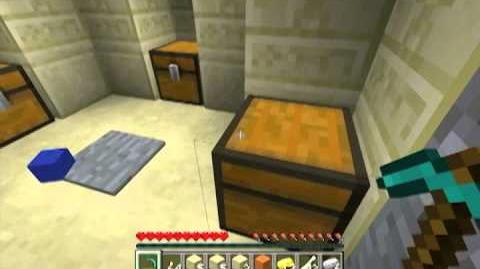 Minecraft - Desert Temple Tutorial
Short, to the point, walkthrough
Add a photo to this gallery
Retrieved from "https://minecraft.fandom.com/wiki/Desert_Pyramid?oldid=206226"
Community content is available under CC-BY-SA unless otherwise noted.