From Minecraft Wiki
Jump to: navigation, search
For other uses, see Desert (disambiguation). 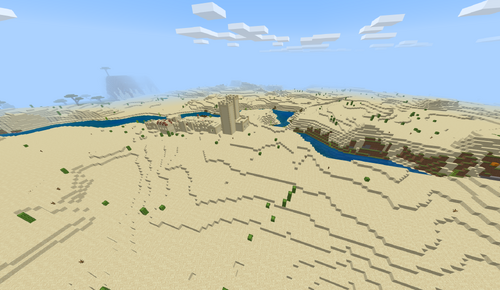 A vast Desert with its typical dunes and a village

The desert is a common warm biome mainly consisting of sand. It has three variations.

Desert biomes are usually vast, quite barren, and lifeless, with the only vegetation being cacti and dead bushes. Among the mobs that can spawn in the desert, only rabbits spawn in the wild, while villagers, cats, cows, sheep, and pigs appear in desert villages. The terrain is flat and the surface is made entirely of sand, with sandstone generating underneath the sand to prevent it from falling into caves below. Water lakes do not generate in deserts aside from the Desert Lakes variant, though lava ponds may still generate; water may still generate if the altitude dips low enough, allowing for sugar cane. Deserts make up for their barrenness by featuring a relatively large number of structures, such as pillager outposts, villages, desert pyramids, fossils, and desert wells. Villages and desert temples may offer refuge and valuable loot, desert wells may serve as a rare source of water, and fossils can provide large numbers of bone blocks and bone meal, or simply a neat archaeological find, while pillager outposts are the only source of wood on the desert surface.

Deserts are usually found next to other warm biomes, such as savannas, badlands, and warm ocean. They also sometimes generate beside jungles and plains. Deserts may also generate as a thin border around badlands biomes should they generate freestanding. Like other warm biomes, they rarely generate near cold biomes.

Despite the structures, survival in deserts can still be difficult if one does not bring sufficient resources, as the desert has virtually no resources of its own. Wood logs can be obtained only from pillager outposts or mineshafts, though dead bushes provide a source of sticks. The only desert water sources are villages, desert wells, rivers, and the uncommon Desert Lakes variant. At night, most zombies that spawn in deserts and variants are replaced by husks, variants of zombies that inflict the hunger effect and do not burn in the sun, resulting in more hostile mobs present during daytime.

The Desert is the standard variant of deserts. It contains villages, desert pyramids, desert wells and fossils. It is mostly flat, with a few small hills.

Desert Hills variants feature hillier terrain, just like all other hills biomes in the game. Desert hills can reach slightly higher elevations than other hills, and are comprised mostly of sand and sandstone like the rest of the desert. No structures other than fossils, desert pyramids‌[Bedrock Edition only], and desert wells may generate within the hills, making this variant overall more difficult. Players should be careful digging up sand in the hills, as it may generate unsupported and cause all other unsupported sand blocks near it to fall if dug up. Desert hills do not generate if their base desert is a thin border around a badlands biome.

Desert hills use the same mob spawning chances as deserts.

The rare Desert Lakes variant features oases of water across its landscape, making this variant a potentially valuable source of water. The terrain is slightly rougher and hillier than the base desert biome, though not as much as the desert hills. No structures other than fossils and desert wells may generate here.

Desert lakes use the same mob spawning chances as deserts.