Dead Bushes are transparent, aesthetic plants that do not obstruct movement, similar to Sugar Cane, wheat, Tall Grass, and hanging vines. Dead bushes can appear in desert biomes, mesa biomes, and sometimes in swamp biomes. They are most commonly light/dark brown in color depending on the user's texture pack.

The current uses for this item are for decoration and as a source of sticks as it drops 0–2 sticks when destroyed. If it is mined with an axe with the Silk Touch enchantment in the Beta 1.9 pre-release, or with shears, it will drop itself instead.

They can be placed on: 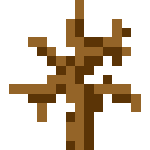 Icon.
Add a photo to this gallery
Retrieved from "https://minecraft.fandom.com/wiki/Dead_Bush?oldid=225938"
Community content is available under CC-BY-SA unless otherwise noted.