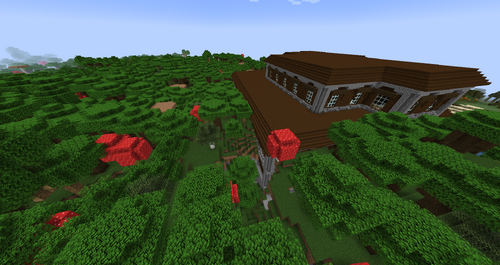 A dark forest biome. A woodland mansion can also be seen.

A dark forest is a temperate forested biome. It is known for its thick, dense leaf canopies that block light sufficiently to allow hostile mobs to spawn during the daytime. It has two variants: the normal dark forest, and dark forest hills.

Dark forests feature a much higher density in trees compared to other forest biomes, which often times block direct views of the sky entirely. Oak, dark oak, and (sometimes) birch trees generate in these biomes; the only place where dark oak trees naturally generate. Additionally, both types of huge mushrooms generate among the trees, though the red variants are more common. Like normal forests, lily of the valley, rose bushes, peonies and lilacs generate in this biome family along with the usual dandelions and poppies. Grass and leaves take on a dark but vibrant green color.

Lava lakes that generate in dark forests can cause locally destructive forest fires, due to the extreme density of flammable wood and leaves; the same goes for lightning strikes that hit the trees during thunderstorms, though the fires caused by the strikes are usually quickly put out by the rain.

Unique to dark forests are woodland mansions, enormous dungeon-like structures that rarely generate within the trees. Woodland mansions are home to the dangerous Illager mobs and are one of the only places where said mobs spawn. Mansions contain various rooms and valuable loot for the player to plunder.

Although players are unlikely to run out of wood in dark forests, survival can still be far more difficult compared to other forest biomes. The dense leaf canopy can often diffuse skylight to the point that hostile mobs can spawn during the day in certain spots. Additionally, hostile mobs can spawn atop huge mushrooms and surprise the player when they suddenly fall near them. Woodland mansions are dangerous to explore without adequate preparation, due to their sheer size and the difficult Illager and other hostile mobs inside. The high density of trees can easily lead to players getting lost if they don't mark their trails using torches or other distinct markers. Using flint and steel in these biomes can help to clear out some trees due to their flammability.

In a given world, Dark Forests often have small patches of plains biomes cutting up through it, forming glades. Dark forests are usually found next to other various lush biomes.

Dark Forest is the most common dark forest variant. The terrain can range from fairly even to hilly, with occasional lakes. This biome has a dense canopy of leaves that reduces the light sufficiently for hostile mobs to inhabit the forest during the daytime. Small patches of plains biomes can generate clearings within the forest. Woodland mansions also can generate here.

Dark Forest Hills can break the leaf canopy, increasing visibility and decreasing the chance of daytime hostile mob spawning, though the hills are steep compared to other hill biomes. Hills generated near rivers can lead to cliffs, risking fall damage if players don't land in the water. Small plains-biome clearings do not generate within the dark forest hills variant. Woodland mansions may still generate here.