This article is a stub.
You can help by expanding it.
Corey Clemans 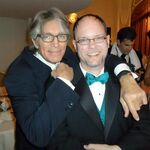 Corey Clemans is a former community coordinator for Latin America for Minecraft. On July 16, 2018, he announced his departure from the company.[1]