It has been suggested that this page be split into Coral tree, Coral claw, and Coral mushroom. [discuss]
If this split may potentially be controversial, do not split until a consensus has been reached.
Coral reef 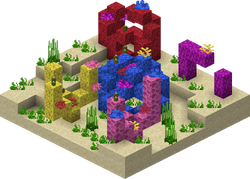 Coral reefs are structures that generate in warm ocean biomes. They consist of multiple clusters of coral blocks, coral and coral fans. These clusters come in a wide variety of shapes, sizes, and colors, ranging from a few blocks of brain coral on the ground to large tree-like structures of fire coral.

A coral reef consists of a few clusters of coral blocks, each of a particular type. Sometimes, these clusters include dead coral, andesite, diorite, or granite blocks.‌[Bedrock Edition only]

Coral reefs are usually topped with coral, and sometimes coral fans and sea pickles. The coral and coral fans are not necessarily the same type of coral as their support blocks; in fact there are often multiple types on the same reef. In Bedrock Edition, coral reefs occasionally include dead coral fans.

Issues relating to "Coral reef" are maintained on the bug tracker. Report issues there.