Edit
watch 28:07
Minecraft Interactive Experience
Do you like this video?
Play Sound
This article is about the ore. For the item, see Copper Ingot. For the mineral block, see Block of Copper.
Copper Ore 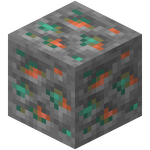 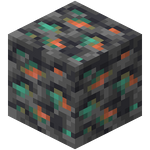 Copper ore can be generated anywhere on the Overworld in the form of blobs. In Java Edition, copper ore tries to generate 6 times per chunk in groups from 0 to 16, in layers 0 to 96, being most common in layers 47 and 48 and less common at the ends. Copper ore can replace stone, granite, diorite, andesite, tuff, and deepslate. Copper ore rarely replaces deepslate and tuff, generating within deepslate and tuff areas of layers 0 to 16. When it is replaced, it becomes the deepslate copper ore.

Copper ore must be mined with a stone pickaxe or higher, or else it drops nothing.

Breaking copper ore drops 2-5 raw copper, unless mined with a Silk Touch pickaxe. It is affected by Fortune enchantment, dropping up to 20 raw copper, or 7.7 raw copper on average with Fortune III.

The primary usage of copper ore is to obtain copper ingots. Nine copper ingots can be crafted into copper blocks. Copper ore does not weather like its block counterpart, though the ore itself shows some oxidization.

Issues relating to "Copper Ore" are maintained on the bug tracker. Report issues there.