Edit
watch 28:07
Minecraft Interactive Experience
Do you like this video?
Play Sound
This article is about the removed item. For the current item, see Goat Horn.
This page describes content that exists only in outdated versions of Bedrock Edition.
This feature used to be in the game but has since been removed.
Copper Horn 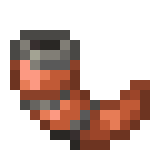 A copper horn was an item crafted from a goat horn and copper ingots.

Copper horns could be found in pillager outpost chests.

Copper horns have been removed from the game, as they didn't live up to the developers' design goals, and as such are no longer supported.[1]