Cooked Porkchop (also called Grilled Pork or Bacon) is a food item that was added in Indev. Cooked porkchops are obtained when a raw porkchop is cooked in a furnace or if a pig that is on fire dies from the fire. Butcher Villagers will also sell cooked porkchops for Emeralds.

Cooked porkchops are often considered one of the easiest forms of Food to obtain since neither mushrooms (obtained via extended exploring or farming) nor extended amounts of time and attention (for growing wheat to make bread) are required to produce them.

Alternatively, burning pigs provides a slightly easier method to obtain cooked porkchops without the need to monitor a furnace. One can burn a pig by making it walk into lava, right-clicking the block under a pig with a bucket of lava, or by lighting the squares around it on fire with a flint and steel. As of 1.0, one can also obtain cooked porkchops by killing a pig with a sword enchanted with fire aspect; however, this only works if the pig dies from the fire and not the sword itself.

This is one of the foods wolves can eat along with raw porkchops. Wolves will sit and beg when one holds a piece of meat in front of them. However, wolves will not benefit any more from cooked pork over raw.

As of 1.8, cooked porkchops now are stackable, along with raw porkchops, making it possible to cook the full 8 porkchops per coal or charcoal. The texture of cooked porkchops has also been changed to a lighter color that looks more like real-life porkchops, and the old texture was used for steak. Cooked porkchops, like all food as of 1.8, now heal hunger instead of health. 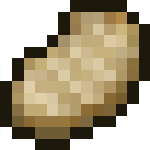 A former texture of a cooked porkchop, before it was changed in 1.8 - The Bountiful Update.
Add a photo to this gallery
Retrieved from "https://minecraft.fandom.com/wiki/Cooked_Porkchop?oldid=207175"
Community content is available under CC-BY-SA unless otherwise noted.